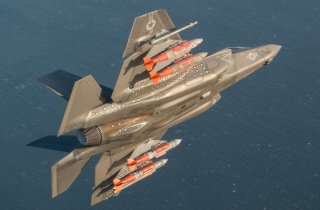 Could the U.S. Air Force dominate the skies in a war with China? This simple question is greatly relevant to Pentagon planners and members of Congress alike given the escalating threat environment in the Pacific and the alarming pace of Chinese military modernization.

This question was presented to Air Force secretary Frank Kendall and Air Force chief of staff Gen. Charles Brown by Rep. John Rice Carter (R-TX) during a budget hearing at the House Appropriations Subcommittee on Defense.

“We’ve got to dominate the airspace to protect armor. As we draw down and take down a lot of platforms, we hope to get to the future quickly. A drawdown in anticipation we will dominate the future causes great concern to me,” Carter told senior Air Force decisionmakers.

Carter explained that his concern resides in the prospect that future capabilities may not arrive soon enough to close the gap created by retiring legacy or existing platforms, and he cited how long it took to for the F-35 to become operational. Is there an expectation or hope that future platforms will arrive soon enough to account for force drawdowns? Or is that presenting a substantial risk given that the timing of when new platforms arrive may not yet be known?

Both Kendall and Brown shared Rep. Carter’s concern and made clear that the service both emphasizes and understands the seriousness of the Chinese threat.

“China spent the last thirty years studying what could defeat the US. We are being challenged and we have to move to the next generation,” Kendall told the subcommittee.

Progress with the Next-Generation Air Dominance, the United States’ sixth-generation fighter program, for example, is moving very quickly in part due to accelerated acquisition procedures and emerging technologies such as digital engineering. Demonstrator sixth-generation aircraft are already airborne, however, the exact timing of their arrival in sufficient numbers may remain unclear to a certain extent, underscoring Carter’s point about the need to ensure current superiority as the service pivots to a new generation of technology.

A number of key variables will determine whether the United States can establish air dominance in a potential engagement with China. At the moment, the United States has a sizable numerical advantage in fifth-generation stealth fighters, given it already operates hundreds of F-35 Joint Strike Fighters across the services, including roughly 300 in the U.S. Air Force. China, by contrast, does not operate many fifth-generation J-20 stealth aircraft and, at least for the moment, would operate at a significant numerical deficit when it comes to stealth fifth-generation capability. However, this potential advantage, as described by both Kendall and Brown, is indeed in jeopardy given the pace at which China continues to produce and upgrade its fleet of J-20 fighters. Secondly, China is moving quickly with a new carrier-launched, fifth-generation air platform, the J-31, and the People’s Liberation Army Air Force is likely to produce this capability in large numbers.

At the same time, the U.S. Air Force has embarked upon an ambitious and thus far successful modernization program with its F-35, with the aim of sustaining its superiority for decades into the future. Therefore, optimizing the best path forward remains an open question, and the Air Force is clearly trying to address concerns that it will face challenges in sustaining its superiority in both the short and long term.