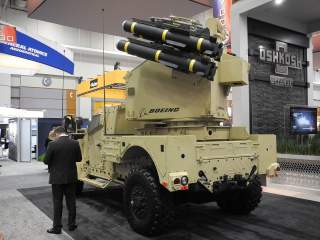 Key point: Drones and short-range rockets are a prevalent threat.

After enjoying years of the Air Force dominating the skies in the fight against the Islamic militants in Afghanistan, Iraq, and Syria, the Army is beefing up its short-range missile-defense capabilities to counter the rockets, missiles, and weaponized drones that are increasingly becoming staples of foreign arsenals. And while the return of active-duty maneuver SHORAD battalions for the first time since the end of the Cold War is part of Chief of Staff Gen. Mark A. Milley’s strategic emphasis on a “combined arms, multi-domain capable” Army, the tactical implications are far more appealing: a bunch of new, explosive toys to play with.

In September, the Army wrapped a showcase of several new SHORAD systems at the White Sands Missile Range in New Mexico, the largest military installation in the United States and the Army’s playground for all things explosively delicious. And the branch’s highlight reel, published on Oct. 30, is everything you hoped and dreamed for — and more.

“Over last few years, the Army has reduced the force structure of the short-range air defense population due to the threat so as the threat has evolved,” said Col. Chuck Worshim, project manager for the Army’s Cruise Missile Defense System office, in a highlight reel released by the branch on Oct. 30. “We need to go back and relook and build and put weapons systems in there that actually support the fighting force as they’re maneuvering to their objective on the battlefield.”While the sole purpose of the demonstration was to expand the Army’s knowledge of existing capabilities and develop requirements for a long-term SHORAD platform, Worshim said, defense contractors are already cranking out missile-enabled mobile platforms to meet the branch’s future needs.

The Stryker MSL and Iron Dome were featured prominently on the floor of the Association of the U.S. Army’s annual conference and expo in Washington D.C. in October, one month after the White Sands SHORAD demonstration, but they weren’t the only ones: Oshkosh unveiled another version of its much-anticipated Joint Light Tactical Vehicle with its own M299 Hellfire-equipped surface-to-air missile turret, while BAE Systems showcased brand-new Bradley Fighting Vehicles outfitted with their own anti-air armaments, an update to the short-lived M6 Linebacker featuring a Hellfire missile launcher system, electronic warfare capabilities, and a 30mm autocannon to blast incoming ordnance and drones out of the sky.

When these explosive goodies will get to flex their muscles downrange remains to be seen. The Army’s 2nd Cavalry Regiment, currently garrisoned at the Rose Barracks in Vilseck, Germany, is set to receive the first batch of upgunned ICVDs in January 2018 — 80 with the 30mm cannon and 87 with the CROWS FGM-148 Javelin missile system. And according to defense contractors, resurrecting the active-duty SHORAD battalions of the 1980s and ‘90s remains an “urgent operational need” for Milley, so far that General Dynamics hopes to get the Stryker MSL ”into the hands of warfighters” by 2019.

“SHORAD remains an urgent operational need for the Army and a top priority [for Milley],” Kendall Linson, business development manager for Stryker and Specialty Wheeled Vehicles and General Dynamics Land Systems, told Task & Purpose at AUSA in October. “We’re just waiting for the Army to give us the requirements.”