Can the U.S.-EU Trade and Technology Council Counter China? 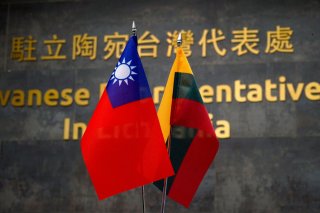 Lithuania, a small Baltic state of 2.8 million people, has become a microcosm demonstrating the strength of the People’s Republic of China’s (PRC) coercive economic influence on disagreeable states.

What began as a spat over Vilnius pulling out of Beijing’s 17 + 1 diplomatic platform in May culminated in Beijing halting imports of Lithuanian goods as Lithuania sought to strengthen diplomatic ties with Taiwan. China holds that Taiwan is part of its territory, with no right to diplomatic recognition. By breaking with diplomatic custom and allowing its Taiwanese office to bear the name Taiwan, instead of Chinese Taipei, Lithuania infuriated Beijing. The Chinese government subsequently demanded that multinational firms cut ties with Lithuania or risk losing access to the Chinese market. It also blocked imports from the European Union that use Lithuanian parts.

As a member of the European Union, Lithuania stands a better chance of resisting China’s coercive economic statecraft than some of its neighbors—notably Ukraine and Belarus. However, on its own, the European Union’s ability to counter Chinese and Russian malign influence is limited—especially when it comes to economic tools. The European Union typically relies on safeguards and anti-dumping measures as trade defense instruments, but these do “not cover the gray economic zone in which China is targeting Lithuania.” The European Union also lacks a bilateral trade agreement with China and faces internal tensions about how to best engage with the Chinese market.

It is essential that the transatlantic community face these challenges together with the tools at hand. The United States and Europe should first take advantage of existing avenues to support Lithuania both as a formal NATO ally and—most importantly—a democratic partner resisting coercive statecraft by an authoritarian actor. That can best be done through the U.S.-EU Trade and Technology Council (TTC), established in September 2021 to “promote U.S. and EU competitiveness and prosperity and the spread of democratic, market-oriented values.”

The United States has already indicated a willingness to do so. In a statement released by the United States Trade Representative on January 7, Ambassador Katherine Tai “emphasized the importance of working with the European Union and its member states to address coercive diplomatic and economic behavior through various avenues, including the US-EU Trade and Technology Council." Investing more in this new collaborative effort to strengthen transatlantic ties and compete with China is a crucial component of the United States’ long-term support of Lithuania and its democracy.

However, the European Union is responsible for the next step because it has, at times, resisted the idea of using the TTC as a tool to counter Chinese economic coercion. China’s actions against one of its own members should incentivize the European Union to rescind its earlier assertion that “[t]he TTC is not a dialogue on China” and recognize the TTC as an effective and readily available tool for the transatlantic alliance to compete with China.

Gibbs McKinley is a program associate for the Center for Global Impact at the International Republic Institute.