Can the U.S. Navy Keep Up With China’s Expanding Fleet? 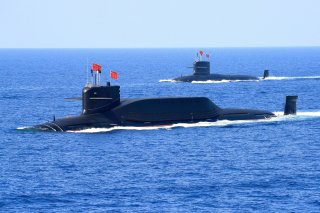 According to a new report by the Center for Strategic and Budgetary Assessments (CSBA), the People’s Liberation Army Navy could soon field a larger number of vessels than was expected.

The recently released document explains that by 2030, China could have as many as ten ballistic missile submarines and a total of 5 aircraft carriers. “Although the exact platform-level numbers in this projection will almost assuredly be off by some degree once the future comes to pass,” the CSBA explains, “the projection overall indicates that the PLA has the resources necessary to continue its modernization over the 2020s.”

CSBA’s assessment also highlights the creeping nature of China’s expanding power, which prioritizes expanding regionally first, and then globally in the future.

“The sequencing of China’s force structure investments may indicate the prioritization of China’s strategic objectives. Rising powers generally consolidate power regionally and then seek to expand globally,” the report explains. “Similarly, in our exercises,” it adds, “teams prioritized the further development of near seas capabilities first, followed by overseas power projection capabilities and posture.”

“This sequencing would emphasize that regional goals, especially Taiwan, continue to have precedence over China’s global ambitions. The PLA’s balance between regional and global force structure investments thus serves as an indicator of Beijing’s strategic priorities,” the report continues.

Interestingly, CSBA points out that China may have to contend with significant operations and maintenance costs over the next decade, given the rapidity with which Beijing has brought new (and especially large and complex) vessels into the Navy. Still, the report adds, those costs are not expected to be insurmountable and are unlikely to hamper future modernization.

Though not necessarily a completely accurate predictor of what the PLA Navy’s exact future force structure will be eight to ten years from now, the report nonetheless highlights China’s expanding navy.

One of the document’s most significant takeaways? That the U.S. Navy would retain its underwater edge, despite China’s increasing qualitative and numerical prowess above the water—an advantage that could prove to be decisive in the future.