Can Walmart Bring Drone Delivery to the Real World? 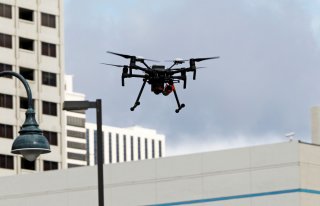 Drone-based delivery has long been presented as a promising technology of the future, although its real-life rollout has been rather slow. Ten companies, including Amazon, have been granted government licenses for use of air drone delivery, but such drones have not really become a ubiquitous part of American life.

One of the companies at the forefront of drone deliveries, Walmart, has announced an expansion of its drone delivery program to additional states.

Walmart has teamed up with DroneUp to expand its drone delivery program to six states and thirty-four sites, the company announced in a press release Tuesday.

The states are Arizona, Arkansas, Florida, Texas, Utah, and Virginia. The company says it will be able to “deliver over 1 million packages by drone in a year.”

“We continue to expand our delivery operations to help customers get the items they need when they need them, and it’s been an exciting journey,” the company said in its press release. “From Express delivery, where customers can have items delivered to their doorsteps in as little as two hours, to InHome, where they can get those orders placed right into their refrigerators, we’re proud to offer customers multiple options that help them save time and money.”

The drone deliveries will be available between 8 a.m. and 8 p.m., and a delivery fee of $3.99 will be charged for the flights, which can be as short as thirty minutes. Not all products will be available for the deliveries; per Walmart, “customers can order items totaling up to 10 pounds, so simply put, if it fits safely it flies.”

Walmart also shared how the program has worked so far.

“After completing hundreds of deliveries within a matter of months across our existing DroneUp hubs, we’ve seen firsthand how drones can offer customers a practical solution for getting certain items, fast,” the company said. “More importantly, we’ve seen a positive response from our customers that have used the service. In fact, while we initially thought customers would use the service for emergency items, we’re finding they use it for its sheer convenience, like a quick fix for a weeknight meal. Case in point: The top-selling item at one of our current hubs is Hamburger Helper.”

The drone services will also be offered to local governments, Walmart said.

“A core value at Walmart is to give back to the communities in which we operate, which is why as we scale our drone infrastructure, we’ll continue to influence the expansion of drone technology and enable other businesses to explore its benefits, too. This means DroneUp will offer local businesses and municipalities aerial drone solutions in areas like insurance, emergency response, and real estate.”

Engadget, meanwhile, questioned whether the program is profitable.