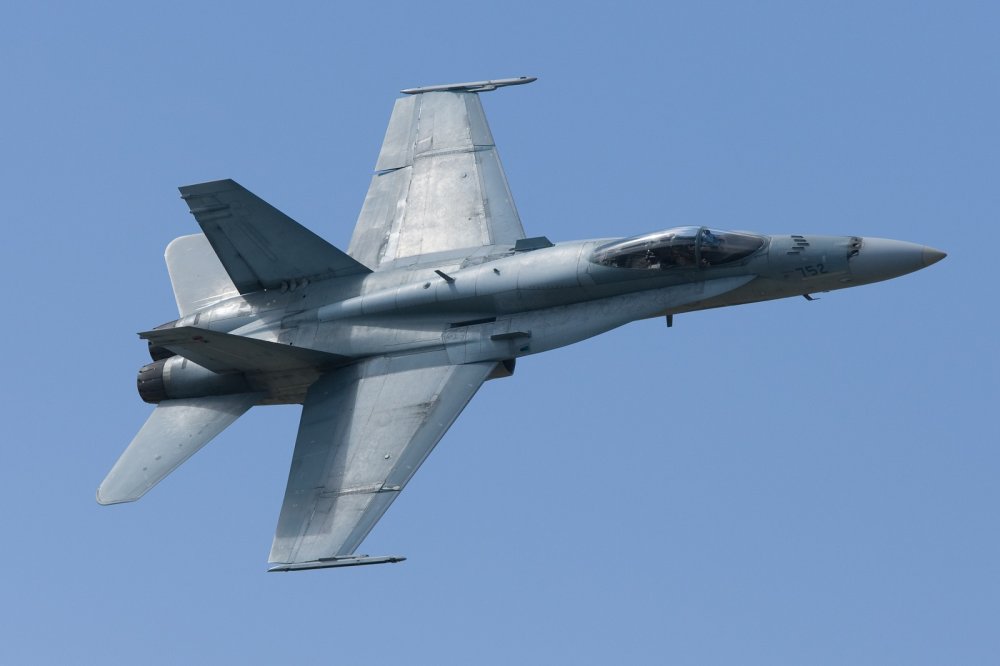 The Canadian air force will get the first two of 25 second-hand F/A-18 Hornet fighters from Australia in 2019, procurement minister Carla Qualtrough reportedly said at a trade show in late December 2018.

But it won't help. With or without used Australian Hornets, the Royal Canadian Air Force's fighter fleet fast is becoming irrelevant. Equipment isn't the biggest problem. Manpower is. But inadequate aircraft contribute to the manpower problem.

The Canadian Hornets are unreliable and lack modern systems. Ottawa twice has botched an effort to replace them. In 2010, Canada's Conservative Party government announced plans to acquire 65 new F-35 stealth fighters by 2020.

But the government never fairly compared the F-35 to rival fighter types such as the Eurofighter Typhoon, the Auditor General of Canada concluded in a 2018 report. "National Defence did not manage the process to replace the CF-18 fleet with due diligence."

In 2015, Liberal Party candidate Justin Trudeau made the F-35 a major issue in his campaign for the post of prime minister. Trudeau won. And in 2017, Ottawa backed off its proposal to purchase F-35s and, instead, launched a new competition to acquire 88 new fighters.

The aircraft would enter service in 2032, meaning the Hornets would have to continue flying 12 years longer than the government originally planned. Ottawa briefly considered acquiring 18 F/A-18E/F form Boeing in order to bolster the early-model Hornets, but the government cancelled the plan during a U.S.-Canada trade dispute in 2017.

Canada was left with its original Hornets. In December 2017, the government announced it would spend around $500 million buying up to 25 1980s-vintage F/A-18s that Australia was declaring surplus as it acquired its own fleet of new F-35s.

But the government had no plan to keep its Hornets combat-ready as they entered their fourth and even fifth decade of service." We found that the CF-18 had not been significantly upgraded for combat since 2008, in part because [the Department of National Defense expected a replacement fleet to be in place by 2020," the auditors found.

"Without these upgrades, according to the Department, the CF-18 will become more vulnerable as advanced combat aircraft and air-defense systems continue to be developed and used by other nations."

Worse, the RCAF was losing technicians. "As of April 2018, according to National Defense, 22 percent of technician positions in CF-18 squadrons were vacant or were filled by technicians not yet fully qualified to do maintenance," the auditors revealed. "We found that between December 2016 and April 2018, CF-18 technicians were able to prepare on average about 83 percent of the aircraft needed to meet the new requirement."

The technician shortage meant fewer Hornets were available for training. "CF-18 pilots are expected to fly 140 hours per year. We found that in the 2017–'18 fiscal year, 28 percent of pilots flew fewer than the minimum 140 hours. According to National Defense, one reason for these fewer hours was the shortage of technicians to maintain the aircraft."

Unable to fly, pilots began quitting the air force. "Between April 2016 and March 2018, the Royal Canadian Air Force lost 40 trained fighter pilots and produced only 30 new ones," the Auditor General of Canada warned. "Since then, an additional 17 fighter pilots left or stated their intention to leave."

The pilot exodus was evident in late 2018 when the RCAF deployed F/A-18s to Romania to patrol NATO's eastern frontier. "One-quarter of our pilots – 23 of them – released last year," a pilot told the Canadian Global Affairs Institute. "Most of those who are leaving are mid-level to senior pilots. They are the ones who are the trainers, so finding enough trainers is hard. It is a major problem."

"Some Canadian pilots have been considering whether to join the Royal Australian Air Force because it would give them a chance to fly highly advanced F-35 fighter jets," the institute reported.

"Is that affecting releases? I’d say yes," the pilot said.

Adding Australian Hornets won't necessarily solve the manpower problem, the auditors cautioned. "The purchase will not fix the fundamental weaknesses with the fleet: the aircraft’s declining combat capability and the shortage of personnel."

"The Australian F/A-18s will need modifications and upgrades to allow them to fly until 2032. These modifications will bring the F/A-18s to the same level as the CF-18s but will not improve the CF-18’s combat capability. In addition, National Defense still does not have enough technicians to maintain and pilots to fly the aircraft."

The problem is already so bad that Canada cannot simultaneously patrol Canadian air space and contribute to NATO missions, the auditors found. Things likely will get worse for the RCAF as the government works toward the planned selection of a new fighter type in the spring of 2021.

"The CF-18 will be disadvantaged against many potential adversaries, and its combat capability will further erode through the 2020s and into the 2030s."