The Canadian Military Claims Its New Machine Gun Is Defective 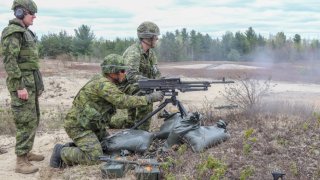 A weapon that soldiers can't rely on is worse than useless. It can put those soldier's lives at risk, which is why this month the Canadian Armed Forces confirmed that 342 defective machine guns received from Colt Canada have been returned to the company for repair.

According to a report from the Ottawa Citizen, the weapons were part of a $120 million (CA) deal with Colt Canada—the Canadian division of the storied American firearms maker based in Kitchener, Ontario—to produce the new C6A1 general-purpose machine gun. Also known as the C6A1 FLEX, it is an improved version of the C6 7.62x51mm NATO machine gun that is itself the Canadian version of the Belgian-made FN MAG.

First introduced in 1958, the FN MAG has been used by militaries around the world and has seen service in more than a dozen conflicts. The C6A1 FLEX, which replaced the C6 in 2019, featured several improvements including a polymer buttstock, M1913 picatinny rails, and adjustable gas tube regulators.

The Canadian Armed Forces have sought to acquire 1,148 of the upgraded machine guns—and in July 2017 announced that they had awarded a $32 million (CA) contract to Colt Canada for the machine guns and related equipment such as a cleaning and repair kit, spare parts, and sling to carry the weapon. The first deliveries were anticipated late last year, with final deliveries to be completed by the end of 2023. Last, the government announced it would spend an additional $97 million for another batch of the C6A1s, some of which would be installed on armored vehicles.

However, it now looks like that timetable for delivery may need to be adjusted due to the defects found in more than 340 of the general-purpose machine guns. According to Canadian media, the problems affect the gun's gas regulator system, which is meant to allow for proper function of the weapon. Additionally, there have been problems with a nut associated with the barrel of the guns. A spokesman for the Department of National Defence has said that about fifty of the new machine guns had been distributed to units when the problem with the gas regulator was discovered.

All fifty of those have already been returned to Colt Canada for repair.

The Canadian Army has also issued a safety advisory to warn operators of the issue with the barrel nut, and units have been advised to replace any defective barrel nuts with new ones that were provided by Colt Canada.

Colt Canada has announced it will cover all costs related to the repair of the weapons and is seeking to complete any necessary repairs by September 30, 2021. "Colt Canada is working closely with the Government of Canada to address any technical issues identified with some of the machine-guns it has delivered to the Canadian Armed Forces," Ceska Zbrojovka Group (CZG), the Czech small arms company that acquired Colt earlier this year, said via a statement. "CZG has full confidence in the quality of Colt Canada's products as well as its quality control system."