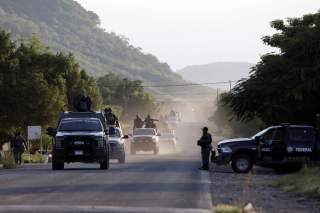 Thirteen Mexican police officers were reportedly killed and nine were wounded in an ambush Monday in Michoacan, Mexico, and one of Mexico’s most revered cartels is suspected of the deaths.

Forty-two police officers responded to enforce a judicial order in the township of Aguililla when they were confronted by 30 gunmen suspected to be from Jalisco New Generation, one of the most dangerous cartel groups in Mexico, the Washington Post reports.

The gunmen reportedly opened fire on the officers with .50 caliber sniper rifles, AR-15s and AK-47s. At least 13 officers were shot dead in the firefight and nine others were reportedly wounded.

An attack on police in the Mexican state of Michoacan, one of the country’s most violent, has left at least 13 officers dead.https://t.co/cnc8FikRdf

The gunmen arrived in several vehicles, some of which were apparently armored, according to the Post.

“No attack on the police will go unpunished, and this was a cowardly, devious attack because they laid an ambush in this area of the road,” governor of Michoacan, Silvano Aureoles, said, the Post reports.

Mexican news media posted photographs of the aftermath of the confrontation, depicting vehicles that were set afire in the middle of the highway after the gun fight. Media outlets reportedly also published messages signed by Jalisco New Generation, the authenticity of which is presently under investigation by Mexican authorities, the Post reports.

Following the attack, Mexican authorities reinforced the region surrounding the scene of the firefight with federal and state security, establishing checkpoints to hunt down the at-large gunmen.

Michoacan, an important region for the avocado-growing industry, has seen a recent spike in cartel violence, according to the Post.