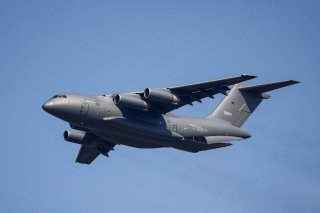 The People’s Liberation Army - Air Force is moving quickly to expand the range of its fifth-generation aircraft by demonstrating that its new YU-20 tanker aircraft can refuel J-20 fighter jets in flight.

A video cited in the Chinese government-backed Global Times newspaper reportedly shows the J-20 being refueled in the air by the YU-20 tankers.

“The YU-20 can conduct aerial refueling for warplanes including the J-20, the J-16 and the J-10C, and such aerial refueling exercises have been carried out multiple times in high-altitude plateau regions and above the sea,” according to a Chinese military spokesman cited by the newspaper.

This development is of great significance given that China has a known deficit in the area of sea-launched fifth-generation aircraft. Unlike the U.S. Navy, which is armed with carrier-launched F-35C stealth fighters and amphibious ship-launched F-35Bs, the Chinese navy has little to no ability to launch fifth-generation stealth air power at sea. Chinese J-20s are land-launched airplanes and while the Chinese navy is quickly developing the carrier-launched J-31 stealth fighter, they do not yet exist in sufficient numbers.  Perhaps most of all, the Chinese lack a vertical-take-off-and-landing fifth-generation fighter capable of operating from a Chinese amphibious assault ship. This means the United States and its Japanese, South Korean, and Australian allies could potentially deploy an overwhelming force of F-35s for operations in the Pacific, potentially placing China at a significant air-superiority deficit.

If China’s fast-emerging J-20, which is now being mass produced in greater numbers, can be successfully refueled in the air, it might place much greater areas of the Pacific at risk during combat operations. While Taiwan is roughly 100 miles from mainland China and within reach of land-launched J-20s, an aerial refueling capability would more than double their range throughout the region.

However, the YU-20 tanker is not a stealth aircraft and would likely be vulnerable to attack from the air and surface throughout parts of the Pacific. U.S. Navy and allied ship-fired anti-aircraft weapons, and ship-launched F-35s would certainly be capable of tracking and destroying these large aerial refueling tankers.