Central Asia Can Help The Next U.S. President Balance Both Russia And China 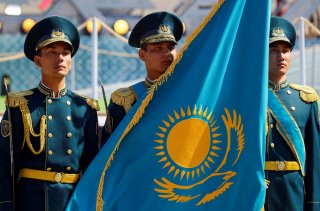 We are once again at that moment when the likelihood of a change in the U.S. administration is significant. Yet, regardless of the outcome of the November 3 election, this year is unique for two different reasons: first, the global coronavirus pandemic, and second, the United States is currently reassessing its global leadership role.

COVID-19 is a historic disruptor for the international political economy and its effects will be felt for a long time to come. It will also leave a lasting impact on how humanity has gone about its daily business since the end of World War II. However, it is the shift in U.S. domestic politics, which has far more long-term implications for international security and stability than COVID-19.

The Trump administration has upended the way in which the United States has been managing the international system that Washington built seven decades ago, but an alternative foreign policy doctrine has yet to emerge. In her seminal Foreign Affairs essay, former Trump deputy national security adviser for strategy Nadia Schadlow made a powerful call for the next administration to let go of old assumptions and develop a new strategic framework for a world in which Russia is exploiting our weaknesses and China is aggressively challenging us on multiple fronts.

The challenges from the Russians and the Chinese are as old as the current international system. Historically, Moscow and (to a lesser extent) Beijing informed the U.S. imperative to counter hegemons from in Eurasia. All throughout the Cold War, Central Asia was behind the “iron curtain” and thus inaccessible to the United States. However, even after the region emerged in the wake of the 1991 Soviet implosion, Washington squandered at least a decade of opportunities.

During the period between the collapse of the former USSR and the re-emergence of a re-energized Russia under the Vladimir Putin regime in the early 2000s, America engaged with the region in a very limited way. Washington could have made greater progress towards better integrating Central Asian economies with the world, but it was an age when U.S. foreign policy was strategically adrift. Then came the long wars in Afghanistan and the Middle East, which consumed a great deal of American bandwidth. In the meantime, Moscow had regained its posture as was evident from its 2008 war in Georgia.

Russia, still influential in Central Asia through the Collective Security Treaty Organization (CSTO) and Eurasian Economic Union, could not forestall Central Asia’s largest state, Kazakhstan, from emerging as a major regional player. This has created yet another opening for Washington to substantively invest in the region. However, the window of opportunity is relatively short.

China is trying (and not so gradually) to fill the gaps being left behind by waning Russian influence. Recently, I had the opportunity to sit down with Daniel Markey to discuss his new book China’s Western Horizon: Beijing & the New Geopolitics of Eurasia, which discusses Beijing policies on its western frontier. Markey makes the important point that the Chinese face significant barriers to consolidating their power in western Asia. As the United States is crafting a new system for managing security in neighboring Afghanistan, the timing could not be better to design a policy aimed at security and stability in Central Asia.

The United States upping its game in Central Asia is a way to simultaneously balance our two principal competitors: Russia and China. Kazakhstan, with whom Washington already enjoys close relations, could serve as a great partner in this effort. It would welcome greater U.S. involvement through trade and economic development in the country and the broader region, especially as the region suffers from coronavirus.

Clearly, the needs of Kazakhstan and the region converge with core U.S. national interests. The Central Asian nation is in the process of a historic political-economic transition under the leadership of its new president, Kassym-Jomart Tokayev, who took office a little over a year ago. In his September 23 address to the 2020 UN General Assembly session, Tokayev heavily emphasized that his government “is determined to build an economically strong, democratically advanced and human-oriented ‘state for the people.’” Tokayev further added that his country “aims to transform Conference on Interaction and Confidence-Building Measures in Asia into a full-fledged organization for security and development in Asia.”

If America remains passive, we are looking at the emergence of one of the largest strategic vacuums, as described by Ariel Cohen in his recent Special Report for the Center for Global Policy. Therefore, the next U.S. president—whether it is Donald Trump or Joe Biden—must place Central Asia as a core component of its global geopolitical strategy to manage an increasingly multipolar world, which is big enough for all powers to trade and thrive.

Dr. Kamran Bokhari is the Director of Analytical Development at the Center for Global Policy (CGP). Dr. Bokhari is also a national security and foreign policy specialist at the University of Ottawa’s Professional Development Institute. Bokhari has served as the coordinator for Central Asia Studies at the State Department’s Foreign Service Institute (FSI). Follow him on Twitter at @KamranBokhari.