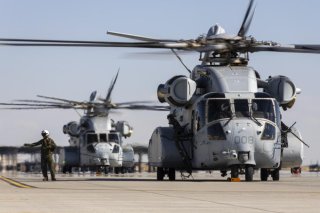 In a Marine Corps statement, Lt. Col.Adam Horne, the HMH-461 commanding officer, stated that “the CH-53K is more powerful, safer and an easier-to-maintain helicopter [when compared to its predecessor]. That’ll allow each wing commander more capacity to sustain the Marine Air-Ground Task Force in an austere environment.”

Not only does the CH-53K King Stallion have three times the lift capacity of its predecessor, the CH-53E Super Stallion, but it is also the most powerful heavy-lift helicopter in the U.S. military.

The helicopter’s design is state-of-the-art—the King Stallion’s three engines are uprated to 7,500 pounds of shaft horsepower each and the helo’s rotor blades are an improved composite material that enhances high temperature and high-altitude performance. The cabin and cargo area are also wider than in previous CH-53 iterations.

“The benefits are endless,” said Staff Sgt. James Ganieany, airframes division chief for HMH-461 in the Marine Corps statement. “We practice our external [lifts] with a Light Armored Vehicle, and we never have power issues. HMH-461 had its first operational flight for the CH-53K in April 2022, and have been training with it ever since.”

Thanks to the CH-53 K’s improved engines and rotor blades, the helicopter can fly for longer distances, at higher altitudes, and in hotter temperatures, giving the Marine Corps a distinctly more capable heavy-lift platform.

Although the CH-53K Super Stallion is unarmed, it would play an essential role in getting equipment from ship to shore during an amphibious assault, one of the most challenging operations in warfare. While the CH-53K can transport up to thirty fully-equipped Marines, it can also carry eighteen tons of cargo.

The King Stallion will also play an integral role in the Marine Corps Force Design 2030 initiative. The Force Design—the brainchild of Gen. David H. Berger, the Commandant of the Marine Corps—calls for distributed groups of Marines to move from island to island in a modern iteration of the Corp’s World War II island-hopping campaign.

“Routinely training with an LAV for an external load, to me, is absolute mind boggling,” said Staff Sgt. Dakota Schneider, a crew chief instructor with Marine Aviation Weapons and Tactics Squadron 1. “It’s got power for days; you can do anything you want.”