The Champ Is Here: What If Glock Lost out to Sig Sauer's P320? 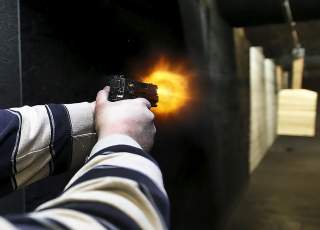 Key point: The P320 is a sturdy gun that has been well received. Given time, the P320 could cut some into Glock's market share.

It likely comes down to the P320’s differences, rather than its similarities to the Glock. Plenty of manufacturers have made “close” Glock-alikes, such as the H&K VP9/SFP9, CZ P-10C, Steyr M-series, and Walther PPQ, but these have seen limited adoption. Conversely, the P320 was selected as the U.S. Army’s M17 pistol and is seeing wide adoption by police departments across the U.S. and Europe. P320s also have seen adoption by the Danish Army.

The P320’s primary difference from the Glock lies in it’s “fire control group”, a metal component that lays within the plastic frame that houses the trigger, sear, and parts that interface with safeties in the slide and the striker. While the Glock also features a similar component, it is solidly attached to the Glock’s polymer frame and cannot be removed. Glock fire control groups are also not standardized across frame sizes, though the recent release of the Glock 47, with a 17-length slide on a 19-length fire control group suggests that they may be moving towards a standard fire control group.

Since the P320’s fire control group is unified across the P320 line of pistols, it allows for easy swapping of cheap plastic frames to suit the user. While this feature was received with some skepticism on the initial release of the P320 in 2014, with users thinking that Sig wouldn’t produce enough grips for the modularity to be worth it, this has been proved wrong. In 2019, Sig Sauer has produced a wide variety of interchangeable frames for the P320 to suit various needs. Compact and Subcompact frames exist for those who need a smaller pistol. Heavier, longer grips such as the tungsten-infused frame exist for those who need more performance. Some third-party manufacturers even make frames that have a folding stock, for use as a stocked pistol. This variety in grips can decrease cost, as only a new slide and frame need to be purchased to convert a pistol from full size to a compact, as opposed to buying a completely new pistol.

While some pistols like the Zev OZ-9 have brought standard Picatinny rails and a swappable fire-control group to a Glock-alike platform, smaller manufacturers lack the ability to produce a wide variety of swappable frames in volume. Sig Sauer, Inc’s larger manufacturing base allows them to do so.

The fire control group also features a trigger without a trigger safety. While this leads to some problems, including the notorious drop discharges, by most accounts these have been fully worked out in current revisions of the pistol. The trigger-safety-less trigger is likely to appeal to those who prefer the trigger feel of older pistols that don’t have trigger safeties.

Price is also lower than the Glock. Street price for a single P320 is around 80 to 100 dollars less than comparable Glock models, and in larger contracts, the price differential is even larger.

Sig Sauer has also been more responsive to industry trends, utilizing more popular cuts and systems for attaching optics to handguns. Finally, the P320 features a standard 3-slot Picatinny rail that doesn’t alter performance in lieu of the one-slot semi proprietary Glock rail that can alter slide movement characteristics when tightened down.

Overall, the fire control group and frame system paired with Sig Sauer, Inc.’s manufacturing capability have made the P320 the most successful competitor to Glock. It allows it to provides modularity and capability where the Glocks are lacking.