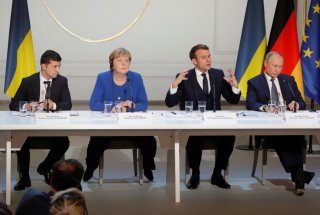 German Chancellor Angela Merkel's stepping down will not change the dynamics of Russian-European relations for four inter-connected reasons.

Firstly, since 2014 the pro-Russian forces in Ukraine have been marginalized and are unable to win presidential or parliamentary elections. They have no possibility of becoming influential again because of the Russian-Ukrainian war, which is how three-quarters of Ukrainians see the conflict in eastern Ukraine. Russia’s occupation of Crimea and the ongoing war have removed 16 percent of voters from Ukrainian elections who traditionally voted for pro-Russian political forces. These voters will not return to participate in Ukrainian elections unless Crimea returns to Ukraine and there is a peace deal on the Donbas.

President Volodymyr Zelenskyy, who believed when he was elected in April 2019  he could reach a peace agreement with President Vladimir Putin, has come up against the same Russian intransigence and chauvinism towards Ukraine as his predecessor Petro Poroshenko. Zelensky would be not be criminalizing two pro-Russian political parties if he still believed he could strike a peace deal with Putin. Zelensky will continue to support Ukraine’s goals of NATO and EU membership which are enshrined in the constitution. Ukrainian support for Russian-led Eurasian integration is at an all-time low and will not recover as long as Russia continues to occupy Ukrainian territory and launch military aggression against Ukraine.

Ukraine will continue to lobby European international organizations, such as the Parliamentary Assemblies of the Council of Europe and the OSCE, and NATO and EU to maintain sanctions and a tough line against Russia. Pro-Russian voices inside Ukraine who would be more accommodating to Russia will remain mooted and without power.

Thirdly, according to Mikhail Zygar, "Putin was obsessed with Ukraine almost from day one." Putin is president for life (or at least until 2036) and the war will continue if he is Russia's leader. But even if Putin were no longer Russian president, the war will not end, as the source of the war lies in Russian views of Ukraine as a central part of the Russian World, Ukraine as an “artificial state,” and Russians and Ukrainians as “one people.”

Fourthly, European (and Western) sanctions will remain indefinitely. This is because Russia will not withdraw from Crimea, no peace agreement will be reached over the war in Ukraine, and Russia will continue to undertake cyber warfare, hacking, assassinations, and other forms of hybrid warfare against Western targets.

Taras Kuzio is a professor of political science at the National University of Kyiv Mohyla Academy and Non-Resident Fellow at the Foreign Policy Institute, School of Advanced International Studies, Johns Hopkins University.