Change History: What It Will Take for Trump to 'Win' a Trade War with China 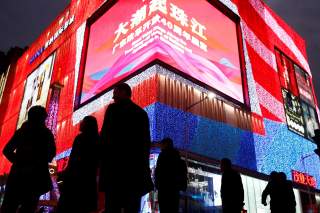 The pair of analysts from the Guangzhou-based Intellisia Institute suggest American policy is, among other things, muddled. The title of their August 23 piece on The Diplomat site says it all: “One Year into the U.S.-China Trade War, Trump Is Still Far from Winning.”

What, for President Trump, is “winning”?

If the two Chens are correct, it is not possible to answer that question because the American leader has not defined what he wants, and many others agree. Take Henry Paulson, Treasury secretary under George W. Bush. “We have,” Paulson told the Wall Street Journal, “a China attitude, not a China policy.”

Yes, Trump has plenty of China attitude, but evident from all that attitude is a policy. Trump, one way or another, is out to change history’s course.

The course of history, in the view of many, is that China will rise to dominate this century. That’s not how the 45th president sees things, however. Trump, unlike his four immediate predecessors, does not seem to be particularly concerned about the welfare of China’s Communist Party. And unlike two—and maybe all three—of his three immediate predecessors, he is not trying to manage American decline.

Trump asserts U.S. power, and to borrow his new slogan, his goal is to “Keep America Great.”

Yes, that phrase is vague, but the policy decisions of the Trump administration evidence a goal of frustrating Chinese ambitions across the board.

Nowhere has the policy been as clear as in the trade area. On the first of this month, the latest batch of increased tariffs on China went into effect. The new tariffs, according to the New York Times, bring average American rate on Chinese goods to 21.2 percent. When Trump came into office, the rate stood at only 3.1 percent.

Trump, both before and after the inauguration, complained about the outsized American trade deficit with China. In 2016, the U.S. merchandise deficit with that country was $346.83 billion. The deficit stood at $167.0 billion in June, on track for $334.0 this year.

So, if the trade deficit is the correct measure—many economists correctly say it is not—America is not exactly winning.

Moreover, America also appears to be losing if theft of intellectual property is the yardstick. The tariffs that everyone loves to complain about—and the tariffs the official China Daily says will “backfire”—are imposed under the authority of Section 301 of the Trade Act of 1974 to remedy such taking. There is no evidence suggesting China’s criminality has been tapering off.

Yet Trump’s broader goal is on the road to fulfillment. To borrow one of Beijing’s favorite words, there is a “decoupling” of the world’s first- and second-largest economies. In a four-part tweet of August 23 loaded with “attitude,” the president “ordered” American companies “to immediately start looking for an alternative to China.”

Although he walked back the comment shortly later, Trump returned to the theme September 1 when he tweeted that importers should find factories outside China so that Americans will not have to be “servants to the Chinese.” Clearly, disengagement is his desired state.

Trump, therefore, is a revolutionary. “We’ve never seen anyone do what President Trump has done,” Chad Bown of the Peterson Institute for International Economics told the New York Times. Bown’s right. As the paper noted with a whiff of disapproval on the first of this month, “Each tariff increase has also taken the United States in the opposite direction from were trade policy has been pointing for decades.”

For some, moving in the opposite direction is absolutely the right thing to do. The tolerant—and often feeble—policies of this and the preceding decade have only led to China’s stealing more IP and engaging in even more brazen violations of trade obligations.

Trump’s revolution has yet to succeed. It is hard to believe Chinese ruler Xi Jinping, who has made his admiration of Mao public, would ever accept fundamental economic reforms or even stop stealing. In these circumstances, therefore, decoupling makes sense.

Xi is the one who started decoupling with policies pushing foreign companies out of China, and now Trump is pulling them out with tariffs. Beijing and Washington, in what increasingly looks like a death match, are restructuring global trade.

Companies are moving factories out of China to avoid the “trade war”—each month brings additional prominent names fleeing Chinese soil—and at least at the moment, it is hard to see these businesses returning. “We’ve created high hurdles to get back to the way things were, and that means we’re probably not going to,” Scott Kennedy of Center for Strategic and International Studies told the Times. “I think the relationship now is essentially in free fall.”

The free fall worries many and angers policy elites, but an irreversible weakening of a predatory communist state looks like a good thing to everyone else. After all, why should the world help fund a Chinese system that is not compatible with the notions that underpin global commerce?

Market participants never like disruptive policies, but a reordering of global trade is now occurring and that will change history. That, for Donald John Trump, is what winning looks like.