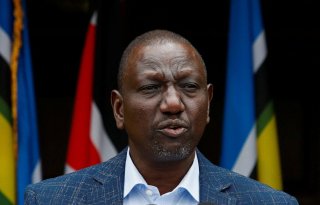 Kenyan deputy president William Ruto was narrowly elected to succeed incumbent leader Uhuru Kenyatta as the country’s next president on Monday. This follows a closely contested vote—although his main opponent has not yet conceded victory and has called for protests and a legal challenge to the result.

Ruto narrowly defeated perennial opposition leader and former prime minister Raila Odinga, who has contested and lost the last five presidential elections. According to the results released by the country’s official electoral commission, Ruto won 50.49 percent of the vote, while Odinga won 48.85 percent.

In his victory speech on Monday, Ruto vowed that he would unite the country, claiming that there was “no room for vengeance” in Kenyan politics and that the country’s leaders needed “all hands on deck” in order to resolve its economic problems. Prior to the onset of the Covid-19 pandemic, Kenya has contended with high unemployment and growing foreign debt.

However, the confirmation of the election’s results was delayed for several hours after four of the electoral commission’s seven members disputed the results. Odinga’s campaign also rejected Ruto’s victory, and local sources reported that a physical brawl had broken out inside the national vote-counting center.

Outside the center, Odinga’s National Chief Agent Saitabao Kanchori explained that the electoral commission’s final result did not match the campaign’s internal tally, leading it to dispute the final count. Kanchori demanded that the two campaigns receive access to the ballots. He claimed that once they had verified the authenticity of the count, “we will be able to know and tell the Kenyan people—because a result that is not verifiable is not a result.” Odinga’s running mate Martha Karus tweeted that “it is not over til it is over” amid a series of pro-Odinga demonstrations.

Odinga—the son of Kenya’s first vice president, Oginga Odinga—has also attempted to contest the outcome of his previous electoral losses. In August 2017, following a ten-point loss to incumbent Uhuru Kenyatta—the son of Kenya’s first president, Jomo Kenyatta—Odinga fought the result in the Kenyan Supreme Court, which annulled the result and ordered the holding of a second election in October. However, Odinga’s supporters boycotted the second vote over alleged irregularities, leading Kenyatta to win with 98.2 percent of the vote.

During the current election cycle, Odinga had consistently held a slight lead over Ruto in the polls prior to the vote last Tuesday, fueling his supporters’ suspicion of irregularities.