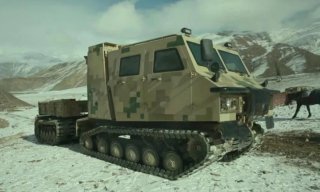 The Chinese military has built an armored, tracked all-terrain vehicle designed to transport forces, weapons and equipment to otherwise unreachable high-altitude, mountainous locations, a move reported to enable an ability for military attackers to maneuver in plateau regions.

“Designed with caterpillar tracks made of metalloid, this new all-terrain vehicle can tread over slopes of 35 degrees, the report said, noting that it can deliver 1.5 tons of goods,” the Chinese government-backed Global Times paper reports.

The new vehicle is intended to support missions at altitudes as high as 5,000 feet, places where roads or any kind of smooth terrain allowing vehicle access simply might not exist.

The vehicle looks lightly armored and somewhat box-like or square and its configuration raises the question as to its actual ability to climb through rigorous terrain. Even if, as reported, the new vehicle can travel up slopes of 35 degrees, it does not appear as though it has the weight distribution needed to manage steep angles, rocky terrain or uneven inclines while driving up a mountain.

Also, it does not appear as though this vehicle would bring any kind of an advantage, in terms of troop, supplies or weapons transport, that a helicopter would not. Furthermore, high altitude mountainous regions likely contain sharp ridges, uneven rocks and ledges and other kinds of impediments to any kind of vehicle travel. Simply put, the vehicle does appear as though it could traverse rigorous or uneven terrain to a certain extent, yet by no means actually climb a mountain.

The vehicle does look like it could travel across plateau areas, however depending upon the altitude, it would seem difficult to actually get a vehicle of this kind up to those locations, unless of course it were transported by a large, fixed-wing cargo aircraft. In this respect, if the vehicle actually did arrive at a high-altitude plateau, it certainly could bring some tactical utility in the sense that it could coordinate logistics between mountain outposts or forces on scout missions. It does not look heavily armored enough to offer any actual combat utility apart from simply safeguarding against small arms fire to a certain extent. Plateau regions have small ridges and uneven areas where a vehicle such as this could potentially bring some operational value, should groups of forces need to be sustained with food, water, weapons, and ammunition in austere, high altitude locations.

While a lot of the vehicle’s specs such as weight, speed, engine efficiency, suspension or armor composition might not be known, photographic renderings of the platform show a tracked vehicle which could be airdropped or sling loaded beneath a large helicopter or possibly even drive off of a transport aircraft.