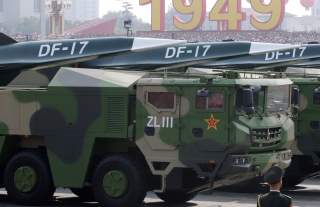 The People’s Liberation Army on Oct. 1, 2019 revealed a new hypersonic missile that could pose a major threat to U.S. forces in the Pacific region.

Nozomu Yoshitomi, a retired Japanese army general who now is a professor at Nihon University, told Reuters the DF-17 could render obsolete existing defenses. “There is a possibility that if we do not acquire a more sophisticated ballistic missile defense system, it will become impossible for both the United States and Japan to respond,” Yoshitomi said.

"We don't have any defense that could deny the employment of such a weapon against us," Gen. John Hyten, then the commander of U.S. Strategic Command, told the Senate Armed Services Committee in March 2018.

"On my instructions, the industrial enterprises and the defense ministry have prepared for and carried out the final test of this system," Putin said, according to TASS. "The test was completely successful: all technical parameters were verified."

In rushing to be first, Russia and China could end up fielding an unreliable weapon, one U.S. official has claimed. In July 2018, Michael Griffin, the U.S. Defense Department's undersecretary of defense for research and engineering, asserted that despite rivals’ progress the United States remained the world leader in hypersonic-weapons research.

The Pentagon determined there was no need to hurry up and equip troops with an unrefined weapon, Griffin told the U.S. Congress. "We didn’t see a need for it."