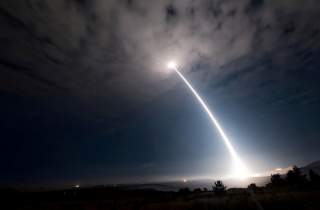 Key point: All militaries must upgrade eventually. But the question is whether an already-terrifying nuclear deterrent needs billions of dollars worth of changes.

The U.S. Air Force’s nuclear command says it’s about to undergo a major reorganization as it prepares to field new bombs, missiles, bombers and rockets.

Air Force Global Strike Command stood up in 2009 as the successor to Strategic Air Command, which maintained around-the-clock nuclear alerts during the Cold War.

It also operates 62 B-1 bombers that do not have a nuclear mission.

The command’s forces are capable of extinguishing essentially all life on Earth within a matter of hours.

Accidents and misbehavior marred AFGSC’s early years. In 2014 ICBM crews got caught cheating on tests. In 2018 security forces at Minot Air Force Base, home to a portion of the Minuteman fleet, lost track of some of their weapons. The suicide rate is high in the atomic force.

Now the command is in the beginning of a modernization effort costing tens of billions of dollars. New B-21 stealth bombers are slated to supplant the B-1s and B-2s starting in the mid-2020s. The Ground-Based Strategic Deterrent rocket, a replacement for the 1960s-vintage Minuteman, is in development.

The new Long-Range Stand-Off Weapon, a nuclear-tipped cruise missile, will replace the B-52’s current nuclear cruise missiles. The bomber fleet is getting a refurbished model of its main atomic gravity bomb, the B-61. The missile wings’ security forces are swapping out their five-decade-old UH-1 helicopters for new MH-139s.

AFGSC wants new concepts to accompany the new hardware. “The need for a clear way ahead is more prevalent now than ever with the rising tensions between Russia, China, North Korea, Iran and transnational violent extremism, and the increase in our adversaries’ nuclear capabilities and innovations,” AFGSC stated.

Some reforms already are underway, according to Air Force Magazine reporter Rachel Cohen.

“The Air Force is beefing up its nuclear education and leadership development, charting missileer career paths for reservists and trying to be mindful of operations stress, the need for a sense of purpose and other health concerns. As the service tries to cut its suicide rate, Ray noted his command can draw on the knowledge of a nearby Department of Veterans Affairs hospital in Louisiana.”

Looking ahead, the command is focusing on the bigger picture. “Among the roadmap’s nine overall goals is an effort to grow the services Global Strike can offer U.S. Strategic Command, which oversees daily operations of nuclear forces, as its air component,” Cohen explained.

Global Strike and STRATCOM practiced what that might look like during Exercise Global Thunder earlier this fall [2019], trying approaches that “have not been done since the Cold War ended” and—in some cases—offer more capability than the military had at that time, Ray said.

Global Thunder is an annual exercise where the U.S. and allied nations like Australia, Canada and the United Kingdom train for conflict scenarios involving nuclear forces.

“We don't have sanctuary in the United States based on lots of different threats,” Ray said. “We start thinking about hypersonics, cruise missiles, ballistic missiles, submarines, space and cyber, all those things will be a dimension of this. How do we operate with those particular challenges working against us? That's probably been more relevant than we've done in a very long time.”

He added that the exercise incorporated newer aspects like space, cyber and electronic warfare “probably more correctly,” but said the details are classified.

AFGSC’s modernization efforts could take decades. The new Ground Based Strategic Deterrent won’t even begin to enter service until the late 2020s, at the earliest. B-21s could be in production through the 2030s.

David Axe serves as Defense Editor of the National Interest. He is the author of the graphic novels  War Fix, War Is Boring and Machete Squad. This first appeared earlier in 2019 and is being reposted due to reader interest.