Check Out These 5 Weird Russian Cruise Missiles (More Like Airplanes, Fired from Airplanes) 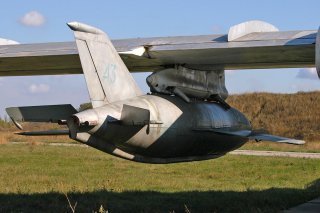 The Komet was possibly the Soviet Union’s first air-to-surface missile. Development began after the Second World War and was intended to primarily be an anti-ship missile, where it would have been used against NATO or American surface groups.

Visually, the Komet was very unusual looking. It had roughly the same dimensions as the Soviet Union’s MiG-15 jet fighter, complete with a large chin air intake right under the nose, along with essentially the same wings and tail assembly. Performance was supposedly similar to the MiG-15.

Unlike modern cruise missiles, the KS-1 was powered by a turbojet engine, which was reverse-engineered Rolls-Royce copy, and was armed with a 600 kilogram, or 1,300 pound high-explosive warhead.

The Sopka was visually similar to the KS-1, but it was fired from transportable launchers that were towed by truck, allowing the cruise missile to be positioned in locations other than just air bases. It also had a rocket-powered assist to get the missile off the ground launcher and up to speed, when the turbojet engine would take over.

It was positioned on the outskirts of the Iron Curtain, and was deployed to a number of locations in Poland and East Germany in preparation for a NATO invasion. The Sopka was also successfully exported to Egypt, where it saw combat against the Israeli Navy during the 1973 Yom Kippur War.

Although the first variants were armed with conventional high explosives, the FKR-1 variant was armed with a nuclear warhead. The FKR-1 had a good range for its time, about 180 kilometers, or roughly 110 miles.

Like the Sopka predecessor, the FKR-1 was also road-mobile and could be launched by a ground-based transporter, instead of being launched from the air. During the Cuban Missile Crisis, a large number of FKR-1s were aimed towards Guantanamo Bay—and Florida.

In 1962, Soviet premier Nikita Khrushchev said that if a war with the United States would break out over the Soviet presence in Cuba, the Guantanamo Bay naval base would “disappear the first day” of hostilities, and he had the missiles to back it up.

Historians do not agree whether commanders on the ground had the authority to order FKR-1 launches. Still, the mere presence of Soviet tactical nuclear missiles so close to the United States was itself a cause for alarm.

The design was updated in the early 1960s by the introduction of the KSR-2. Though rocket-powered, the newer design retained the wings and tail assembly of the Komet. The design was significantly more capable. Rocket propulsion allowed the missile to be launched from lower altitudes and at lower speeds. It also enjoyed a significantly extended range—up to 200 kilometers compared to the Komet’s sub-100 kilometer range.