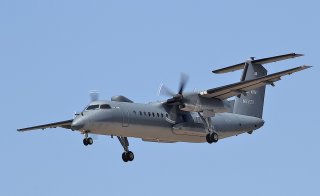 The ARES platform is based on the Bombardier 6000/6500 airplanes, business jets originally designed for luxury flight, but that offer the right mix of range and payload capacity to serve in a specialized intelligence, surveillance, and reconnaissance (ISR) role for the United States Army.

The ARES airplane is serving as a technology demonstrator for the Army’s High Accuracy Detection and Exploitation System (HADES) program, which the Army hopes can mesh “capabilities from the Army’s existing ISR fleet with capacity to add payloads, sensors and increase standoff ranges.”

And in an ISR role, the aircraft would succeed. Boasting brand-new Rolls-Royce engines and a nearly 7,600-mile range, the jet can cruise at over 40,000 feet and has a flight endurance of over fourteen hours in the ARES configuration. “Flight operations above 40,000 feet enhance aircraft survivability and line-of-sight,” according to a recent statement, and helped make “ARES and HADES key Sensor to Shooter (S2S) network enablers, the Army’s top modernization priority.”

Of crucial importance is the Bombardier 6000/6500 payload capacity: a whopping 14,000 pounds, with enough onboard space available to seat seventeen personnel comfortably. The planes are fast too—around Mach 0.90, depending on individual airplane configuration.

It is possible that the new Airborne Reconnaissance and Electronic Warfare System aircraft could go on to replace the Army’s Guardrail Common Sensor (GRCS), the Army’s current Signals Intelligence aircraft. The Cold War-era legacy aircraft is nearly half a century old and an aircraft the Army would like to replace.

Previous reporting highlighted just how old the Guardrail plane is: Army technicians have been forced to source parts from airplane boneyards just to keep the turboprop airplane flight-worthy.

Work on the U.S. Army’s new eyes and ears in the sky has been done at a break-neck pace. “L3Harris is helping the Army rapidly expand its ISR capabilities with ARES,” L3Harris’s President of Aviation Services explained. “Our design, fabrication, and integration team turned a green airframe into an initial single sensor capable platform with new sensing technology in six months.” Though still undergoing testing, the United States Army will likely have a greatly expanded intelligence, surveillance, and reconnaissance capability sometime soon.