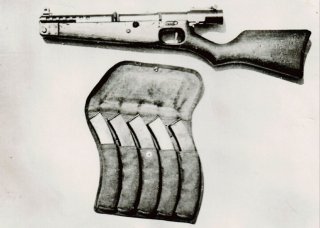 While most modern military assault rifles feature a magazine forward of the hand (or pistol) grip, there is also the category of "bullpups," which feature the magazine behind the grip located in the stock. However, despite often being called a "pistol grip," few modern firearms actually feature a grip with a magazine well.

The most famous, even infamous, examples include the Israeli Uzi and the Military Armament Corporation Model 10 (M10), which is more commonly known as the MAC-10. However, the Czechoslovakian-made CZ Model 25 (Sa 25), which was produced in 1948, pre-dated both the Uzi and M10, yet even that wasn't the first to feature a magazine well in the grip.

Two different designs from the World War II Axis powers could lay claim to being the first, but neither proved successful and apparently not all that memorable either.

The Type II submachine gun, which was designed by Kirjro Nambu for the Imperial Japanese Navy, was actually produced in time for the invasion of Shanghai in 1937—so technically before the actual outbreak of the Second World War. It was originally chambered for the 8mm Nambu pistol round, but as it had a tendency to jam, a smaller version with a lighter round was also developed. As with the Uzi and M10, it was a blowback-operated SMG, but it could be fitted with a bayonet—in that regard, it wasn't the first, however, as the Austrian-produced Steyr MP34 also had a bayonet mount.

Some 30,000 of the Type II SMGs were produced, and most were apparently used in China, which is likely why so few survived the war. What is also unique with the Type II is that it featured a curve magazine that could hold 50 rounds, but this made the weapon far too heavy, so a smaller 33 round magazine was also produced.

The FirearmsBlog rightfully described the Type II as "Great and innovative idea, horrible implementation." The magazine's placement resulted in jams but also made it impossible for IJN Landing Force marine troops to use the weapon in a prone position while the issue of jamming was never fully resolved.

However, it wasn't the only early attempt to feature a pistol grip magazine well.

The other was the OG-43, a rather crude firearm that was designed by Guiseppe Oliani for the Repubblica Sociale Italiana (Italian Social Republic), the German puppet state that maintained control of Northern Italy after the Kingdom of Italy surrendered to the Allies in September 1943. Società Anonima Revelli Manifattura Armaguerra produced a prototype of the simple stamped steel blowback submachine gun.

It was chambered for the 9x19mm, the OG-43 feed from a Beretta M38A double stack, double feed magazine. What is notable is that this SMG didn't even have a pistol grip, and instead, the magazine was used as the grip. While this was likely not the most comfortable grip, it did make for a compact design. The OG-43 is also arguably a historically important design in that it was the first submachine to combine a stamped-steel construction with a bolt that put most of its weight in front of the breech face and a magazine in the pistol grip.

Despite the innovative features of these two weapons, both were little more than prototypes that needed serious refinement. However, those features likely inspired other designers that resulted in far better weapons.