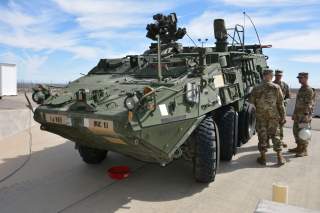 The Army isn't stopping at 50-kilowatt laser weapons for Stryker vehicles, though.

WASHINGTON – After years of testing out a low-energy Stryker-mounted directed energy system, the Army is formally pushing for a combat-ready laser weapon to blast enemy drones and ordnance out of the sky in the next four years. Task & Purpose reports. Continue reading original article

5 Aug. 2019 -- The Army officially is accelerating the prototyping and fielding of four Stryker vehicles outfitted with 50-kilowatt laser weapons by 2022 -- a ten-fold increase over the 5-kilowatt system that artillery soldiers have been testing in Germany since early 2018.

The Army isn't stopping at 50-kilowatt laser weapons for Stryker vehicles, though. The service is pursuing a prototype 100-kilowatt high energy laser tactical vehicle demonstrator (HEL-TVD) laser not just to mount on medium tactical vehicles, but also to inform other directed-energy efforts across the U.S. armed forces.