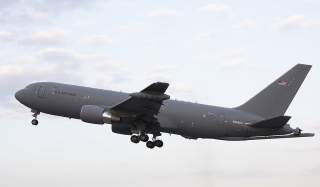 The first new, high-tech next-generation KC-46A aerial refueling tanker will be delivered to the service later this year, marking the beginning of a long-sought after effort to replace the current aging fleet and better enable attack and ISR missions around the globe, service officials say.

A new tanker, which will of course modernize and sustain the refueling mission for the Air Force, is fundamental to the service’s air superiority and rapid deployability priorities.

The new KC-46A tanker will build upon the mission current tankers currently serve, meaning it will be forward- stationed at strategically vital locations around the globe to increase mission length and effectiveness, as needed, for a wide-range of aircraft, Air Force developers said.

Extending the strike range of attack aircraft such as an F-15, F-35 or F-22 brings great tactical significance in a modern threat environment wherein long range strike weapons used by potential adversaries could make it challenging for the Air Force to base and launch fighters within the proper striking proximity. Such a dynamic may be of particular relevance in places like the Pacific, where a much-discussed "tryanny of distance" imposed by the region's geographical expanse can make attack mission access much more challeng

Air Force spokeswoman Maj. Emily Grabowski said the Air Force and Boeing recently completed a schedule risk assessment, and found that extended time needed for ongoing testing will delay the delivery of the first tanker by several months to close to the end of this year. The Air Force plans to acquire the new tankers will into the late 2020s.

“This assessment is based on known risks and predicted impacts associated with airworthiness certifications and slower than expected flight test execution. The Air Force will continue to work with Boeing to develop schedule mitigations, where appropriate, to expedite the program,” Grabowski said.

The Air Force’s multi-year tanker procurement effort, regarded and protected as a high priority from service and Pentagon leaders, is described as a needed asset to replace the aging current fleet of tankers. The average KC 135 is about 50 years old and the average KC 10 tanker is roughly 29 years old, Air Force officials said.,

The 165-foot KC 46A is being built with Pratt and Whitney engines and the ability to transport up to 212,000 pounds of fuel and 65,000 pounds of cargo. The aircraft will bring an improved ability to conduct aerial refueling missions, Air Force officials said.

For instance, the new tanker will have and improved ability to refuel aircraft via the probe and drogue while also using a boom and receptacle on a single mission. Essentially, the aircraft can conduct multiple refueling missions concurrently using a drogue, or refueling mechanism on the wings, and a more standard boom and receptacle system. The refueling boom can operate on a fly-by-wire control system, Air Force data says.

Air Force KC-46 developers say the Boeing 767s are being engineered and manufactured with some military specifications in mind so as to prevent the need to strip down the aircraft and fully re-configure it for military use, as has often been the case with prior Air Force aircraft acquisition efforts.

The Air Force KC-135 planes being replaced by the new tanker were produced in the late 50’s and 60’s. They are an average of 52-years old, officials said. The KC-46A is able to carry 1,500 more pounds of fuel compared to the existing KC-135.

The KC-46A is engineered with a centerline drogue system that can transfer 400 gallons per minutes and a boom that can move up to 1,200 gallons per minute, he said. It is also configured for aeromedical evacuation and has a reconfigurable cargo deck floor able to carry up to 58 passengers. Like other Air Force planes, the KC-46A is engineered with a radar warning receiver, cockpit armor, VHF satcom radios, Link 16 and digital displays, service officials said.

The aircraft has two high-bypass turbofans, mounted under 34-degree swept wings, power the KC-46A to takeoff at gross weights up to 415,000 pounds, an Air Force fact sheet said.

The cockpit is built with 24-inch 3D, digital displays equipped with touch screen capability. The aircraft enables crew members a 185-degree field of view and has low-wave infrared cameras.