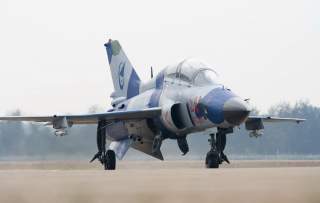 China’s Guizhou Aviation Industry Corporation has started production of its new export-oriented FTC-2000G lightweight multirole combat aircraft. The new light attack aircraft is expected to make its first flight by the end of September according to official Chinese government media.

“China-developed FTC-2000G, an export version versatile aircraft, on Wednesday hit the production line in the city of Anshun in southwest China's Guizhou Province, according to its developer,” the official Xinhua Chinese state media agency said. “The FTC-2000G was developed by the Guizhou Aviation Industry Corporation under the state-owned Aviation Industry Corporation of China (AVIC) to meet the demand of the international market. The company has full independent intellectual property rights of the aircraft.”

The FTC-2000G is the latest derivative of the Guizhou JL-9 supersonic advanced jet trainer, which serves with both the Chinese People’s Liberation Army Air Force (PLAAF) and the People’s Liberation Army Navy. Indeed, Guizhou initially adapted the JL-9 design—which itself can be traced back to the Chengdu JJ-7 and ultimately to the Soviet MiG-21 fighter—into the export-oriented FTC-2000 advanced jet trainer. However, sensing that there might be a market for a light attack aircraft particularly to replace the French-German Alpha Jet, the Chinese have adapted the FTC-2000 into a light strike fighter—albeit at the cost of range, endurance and speed.

“It features attacking, fighting and training functions and can fully replace the F-7 and A-5 aircrafts,” AVIC states on its website. “In addition, the FTC-2000G will replace Alpha Jet and FT-7 in the accomplishment of basic and senior fighting tasks for pilots. With high operational effectiveness and training efficiency, it is the ideal upgrade to replace second-generation light aircrafts.”

AVIC is not shy about bragging about the FTC-2000G’s technologies such as its diverter-less supersonic inlets, which made their debut on Lockheed Martin’s stealthy F-35 Joint Strike Fighter. “The FTC-2000G has adopted a cutting edge wing design and a unique BUMP inlet on the front and back flap of large areas for a four generational aircraft,” AVIC states. “That, and other advanced technology, gives the aircraft a wide flight envelope with an excellent flight performance and quality.”

AVIC brags about the FTC-2000G’s transonic performance—which is important for fighter aircraft designs. “FTC-2000G has remarkable maneuverability in high transonic regions at medium and low altitudes, with a low speed and take-off/landing capacity,” AVIC states. “The flight envelope is wide with broad field of view for pilots to control the front and rear cabin. The air equipment and weapon system is fully equipped with remarkable safety and reliability to replace both the Alpha Jet and the FT-7 in accomplishing basic and senior training tasks with other primer fighting and tactic tasks.”

However, while the Chinese might have developed a competent low-cost, low-performance light attack aircraft for the low-end market, there is the open question as to whether there is a market for an aircraft such as the FTC-2000G. China has not gotten far in marketing its Chengdu FC-1 Xiaolong—perhaps better known as the JF-17 Thunder—to even the lowest end of the international fighter market. Only Pakistan operates the FC-1 in any quantity while a handful of other states such as Nigeria and Myanmar have placed orders for the less than impressive warplanes. The FTC-2000G is aimed at a rung even lower than FC-1—offering less performance and capability at an even lower cost. While it is possible that China might find a buyer for the FTC-2000G, it is not going to be easy when even states such as Myanmar would prefer to purchase the much more capable and expensive Sukhoi Su-30 Flanker.