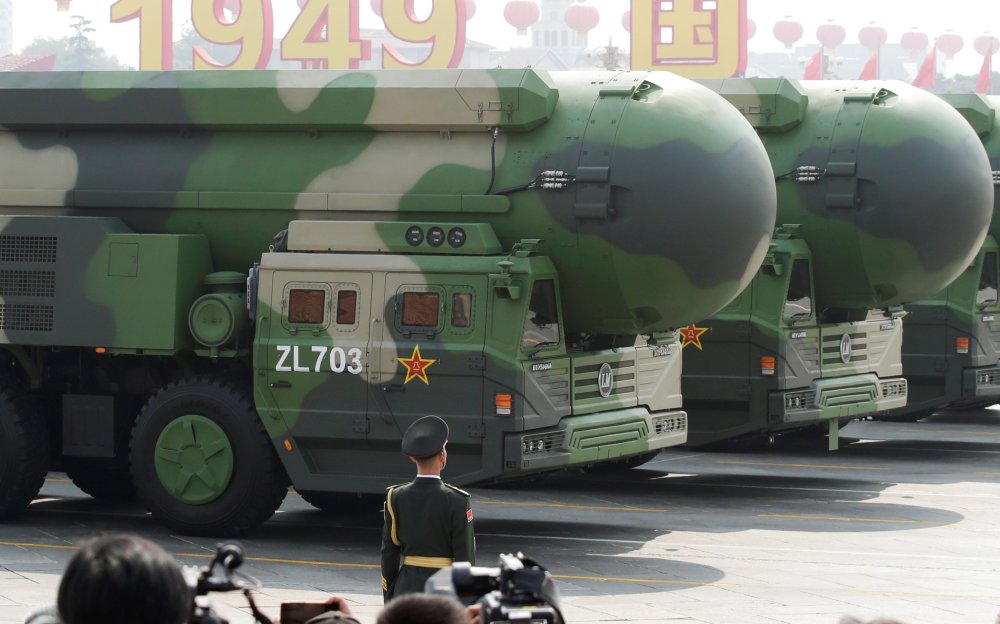 Key point: China has modernized its military and sought to take advantage of America's weaknesses.

This week, the People’s Republic of China celebrated the 70th anniversary of its founding by holding a massive military parade. The parade featured a number of formidable weapons systems that demonstrate the growing capability of the Chinese military, the erosion of U.S. military superiority, and the need for continued action by Washington and its partners.

As expected, the parade featured the DF-21D anti-ship ballistic missile (or “carrier killer”) as well as the DF-26 missile. The latter is a ground mobile intermediate-range ballistic missile, which extends Beijing’s near-precision strike capability as far as Guam. These systems enable Beijing to target ships and bases in the region, potentially creating no-go zones for the U.S. military and its partners. If successful in this effort, Beijing may conclude it could successfully undertake military aggression, for example against Taiwan.

This week’s parade also included the debut of the DF-41 intercontinental ballistic missile (ICBM). It is a ground-mobile ICBM with a maximum range of 9,300 miles, capable of carrying multiple independently targetable reentry vehicles. That range provides Beijing the means to target the mainland United States. China has also been developing maneuverable warheads, decoys, chaff, and jamming techniques that could make the DF-41 more difficult to intercept.

Beijing also exhibited the JL-2 submarine-launched ballistic missile, which is designed to be launched from one of China’s four operational Jin-class ballistic missile submarines. The JL-2 has a range nearly three times greater than that of its predecessor, the JL-1.

The Chinese also displayed the DF-17, a ballistic missile booster and hypersonic glide vehicle designed to evade U.S. missile defenses. As the 2019 U.S. Missile Defense Review notes, China is “developing advanced cruise missiles and hypersonic missile capabilities that can travel at exceptional speeds with unpredictable flight paths that challenge existing defensive systems.” To intercept such a system, the U.S. must first be able to track it – underscoring the U.S. need for a space-based hypersonic and ballistic missile tracking sensor. Such a sensor would take advantage of the large area viewable from space and enable the U.S. to track and target advanced threats.

In addition, the parade included two new unmanned aerial vehicles and an unmanned underwater vehicle (UUV). The GJ-11 Sharp Sword drone boasts stealth characteristics, and the WZ-8 is believed to be a rocket-powered, high-altitude reconnaissance vehicle. Also on display was the HSU-001, a large UUV featuring dual screws to enhance cruising speeds.

The U.S. military has struggled to receive the timely, sufficient, and predictable funding necessary to support current operations, maintain readiness, and modernize the force.  Meanwhile, Beijing has studied how America fights and has modernized its military accordingly. As a result, in some areas, U.S. military superiority has eroded or vanished. The DF-41 and DF-17, as well as other capabilities displayed this week by Beijing, underscore once again the need for a fully modernized U.S. nuclear triad, increased U.S. firepower in the Indo-Pacific, as well as better homeland missile defense.

Thanks to the well-formulated 2017 National Security Strategy and 2018 National Defense Strategy, belated clarity regarding the China threat, and robust and timely defense funding over the last two years, the Pentagon has initiated one of the most aggressive and important modernization efforts in decades.

But these steps will require timely, sufficient, and predictable funding from Congress. Absent that, the security of the American people will further erode, and U.S. troops may find themselves in a future conflict they will struggle to win against an increasingly capable Chinese military.

Bradley Bowman is senior director for the Center on Military and Political Power (CMPP) with the Foundation for Defense of Democracies (FDD), where Andrew Gabel is a research analyst. Follow FDD on Twitter @FDD and @FDD_CMPP. FDD is a Washington, DC-based, nonpartisan research institute focusing on national security and foreign policy.

This article first appeared at the Foundation for Defense of Democracies.