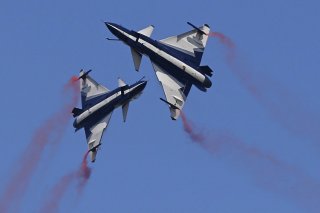 It has long been believed that China was no longer developing its new J-31 fifth-generation stealth fighter purely for international sales but as a domestic platform as well. By extension, it has also been believed that China has been fast progressing with a carrier-launched FC-31 twin-engine stealth fighter jet intended to rival America’s F-35 jets.

Purported to be a stealthy fifth-generation platform capable of matching the amphibious-launched U.S. Marine Corps F-35B or carrier-launched F-35C, the emerging FC-31 jet would introduce an as of yet unprecedented maritime attack capability to the large and fast-growing Chinese Navy.

Certainly, any kind of “F-35-like” maritime power projection presents a substantial threat to the U.S. Navy, it does not seem at all clear that the new jet is in any way comparable to an F-35 jet in terms of performance. The external configuration of the FC-31 jet appears like a transparent rip-off of the designs for American F-35 and F-22 jets. After all, China is known to engage in consistent efforts to steal or copy U.S. weapons platform specs. However, a general external similarity does not in any way guarantee that the aircraft is comparable to an F-35 jet in any capacity.

As a platform intended to launch from Chinese carriers, the FC-31 jet does not appear to operate with any kind of F-35B-like vertical take-off-and-landing, and its ability to parallel, replicate or in any way “match” the computing, sensing and weapons capabilities of an F-35 jet. Should amphibious assault ship-launched U.S. F-35B jets attack the Chinese Navy or defend Taiwan, Chinese surface assets may not be able to respond or match the threat without having one of its two aircraft carriers armed with the planes immediately available.

While stealthy, the F-35 jet likely achieves its superiority as much through sensing, computing, data analysis and software-enabled weapons attacks as it does with a stealthy exterior. To what extent might an FC-31 jet replicate this? That is perhaps unknown to a large degree, yet it might be a deciding or crucial factor when it comes to assessing the seriousness of the actual threat posed by the aircraft. There are many more aspects to stealth than external configuration or contours, as an ability to elude radar relies greatly on an ability to reduce or manage heat emissions, deliver or carry weapons and incorporate radar absorbent materials.

Regardless of the specific margins of its capability, an FC-31 carrier variant would likely give the Chinese Navy new attack or maritime combat options. A carrier-launched fifth-generation stealth fighter would massively expand China’s ability to project power internationally, especially in places such as the South China Sea where it may be difficult to build runways for a fixed-wing attack. A sea-based fighter could surveil or target island areas without needing to take off and land from one of the islands themselves, thereby making themselves less vulnerable to ground or runway strikes against their air operations. It also goes without saying that fifth-generation air support would change the threat equation for Taiwan should it face an amphibious attack.

Having fourth-generation aircraft able to launch from carriers, such as an equivalent to the U.S. F/A-18 jets, perhaps the J-10 jet, may limit an ability to conduct operations over areas with extremely advanced air defenses. A stealthy fighter, however, while still at risk against some emerging air defenses, enables global power projection in a substantially different way. It takes little imagination to envision China’s grand ambitions for expanded global influence, as having attack-power projection fortifies their current efforts to expand into many areas of Africa, the Middle East and of course Southeast Asia.