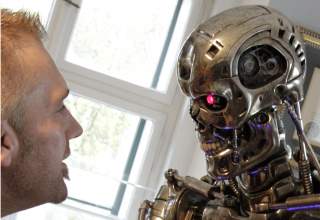 An article appearing in multiple Chinese government journals paints a picture of what Chinese experts call the “intelligentization” of warfare, a term coined by Chinese scholars in which artificial intelligence dominates the battlefield.

“Human fighters will fade away from the first line of fighting,” says the article, excerpts of which were translated by the U.S. Army’s Foreign Military Studies Office. “Intelligent equipment will be brought onto the battlefield in large quantities and as whole units. ‘Human-on-human’ warfare in the traditional sense will be superseded by ‘machine-on-human’ or ‘machine-on-machine’ warfare.”

“Such means of human-machine combination as brain-machine interfaces, external skeletal systems, wearable devices, gadgets implanted into human bodies will comprehensively enhance the inherent cognitive and physiological capacity of human fighters, and will forge out ‘superman combatants.’

In China’s Terminator-esque vision of the future, the cognitive domain – intellectual skills and knowledge – will become another theater of war. True power will rest with those nations whose AI is capable of both analyzing immense amounts of data, and autonomously making decisions at incredible speed. “The cognitive domain will become another battle domain next to the land, sea, air, space, electromagnetic, and cyber domains of warfare. ... the three major warfighting dimensions, that is, the physical dimension, the informational dimension, and the cognitive dimension,” the article predicts. “The boundaries of war will extend into the deep land, deep sea, deep air, deep cyber, and deep brain domains...Intelligentized warfare will be generalized to all military conflicts and rivalries, giving rise to a more striking feature of integration between military and non-military domains. The scope of warfighting will expand to the extremes. The boundary between peacetime and wartime will get increasingly blurred.”

“Cross-domain unconventional and asymmetrical fighting will become a new normal in military engagements... Unmanned operations, as a prominent hallmark of the new warfighting pattern, will rewrite the rules of engagements and reshape the support processes. Intelligence control will replace spaces control as the center of gravity in war.”

Not surprisingly, China is vigorously developing its AI capabilities. “The Chinese leadership aspires to achieve a dominant position in AI, surpassing the U.S. in the process, in order to take advantage of the unique advantages that AI could confer to China’s economic competitiveness and military capabilities,” wrote China expert Elsa Kania in 2017.

“Certain PLA thinkers anticipate that the intelligentization of warfare will result in a trend towards a battlefield ‘singularity,’ such that human intelligence may prove unable to keep pace with the new operational tempo of machine-age warfare,” Kania said. “At that point, as warfare occurs at machine speed, keeping humans “in the loop” for the employment of weapons systems or even certain aspects of decision-making could become a liability, rather than an asset. Consequently, AI could necessarily take on a greater role in command and control.”

America seems to be the leader in AI for now, thanks to Silicon Valley tech firms such as Google, which has developed machine intelligence capable of everything from defeating human chess champions to driving automobiles. The Pentagon is also jumping on the AI bandwagon, to create artificial staff officers, hive minds capable of controlling swarms of drones, or even robotic fighter pilots.

Yet even at best, China won’t lag far behind the U.S.  At worst, China may to take the high ground on the AI battlefield.