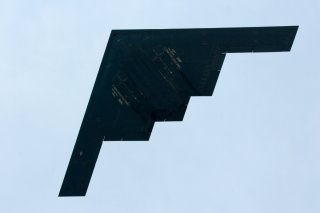 The Chinese Communist Party is dropping hints that the country’s first stealth bomber will soon be revealed.

Speaking at a rally meeting, Ge Heping, Party chief of the Chinese Flight Test Establishment under the state-owned Aviation Industry Corporation of China (AVIC), asked “all personnel involved in the development of the aircraft to fully realize the extreme importance of completing this mission,” Global Times, a Chinese state-owned media group, reported.

However, neither the precise nature of the aircraft nor what its designation would be were announced. It is anticipated, however, that China’s much-anticipated H-20 strategic stealth bomber is the aircraft in question.

China’s H-20 stealth bomber has not been officially revealed, though the bomber is expected to share a number of design details with the U.S. B-2 Spirit stealth bomber and, potentially, the B-21 Raider. A single promotional video, released in 2018, showed the H-20’s general outline by way of a blanket-covered airframe, which lacked any prominent rear tail control surfaces. Though the rendering drew lots of attention, the final production aircraft may differ from promotional images.

Like the B-2, the H-20 features what strongly appears to be a flying wing design. These kinds of tailless aircraft have an inherent stealth advantage, as a lack of tail offers enemy radar fewer surfaces that can be picked up by radar and “ping” a return signal.

It is possible, however, that instead of the H-20, China may soon reveal one of several other advanced aviation projects instead, both carrier-related. In addition to the J-15 catapult-launched naval fighter jet, China also has a stealthy carrier-based jet in the works, the J-35. Like the H-20, the development of the J-35 fighter is thought to have leaned heavily on American designs, if not outright theft of information related to the two stealthy aircraft.

China recently launched its third and largest aircraft carrier, the Fujian. Although that aircraft carrier is conventionally powered (the U.S. Navy’s latest aircraft carriers are all nuclear-powered), the Fujian represents an important expansion in the People’s Liberation Army Navy and underscores the extent to which China is rushing toward expanded capabilities and modernization.

Though speculation is rampant, the H-20 represents a massive leap in capabilities for Beijing. Not only would the H-20 be Asia’s first indigenous stealthy strategic bomber, but it could also potentially alter the balance of forces in the Indo-Pacific region.

Irrespective of which aircraft China is poised to reveal, there is no question that Chinese stealth aircraft are progressing by leaps and bounds. In addition to the H-20 stealth bomber, China already operates the J-20 and FC-31, both of which incorporate a number of stealth-mitigating features. U.S. intelligence also believes that the H-20 may be complemented by two other stealthy bomber designs, as well as accompanied by a new fighter-bomber.