China Activates an ‘Airborne’ Leg for a Nuclear Triad 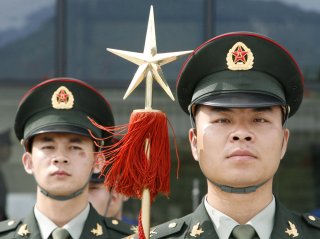 China is taking steps toward solidifying the air-leg portion of a nuclear triad with its nuclear-capable Xian H-6N bomber, according to the Pentagon’s recently released 2021 report on China’s military capability.

The report, titled Military and Security Developments Involving the People’s Republic of China, notes that in “October 2019, the PRC signaled the return of the airborne leg of its nuclear triad after the PLAAF publicly revealed the H-6N as its first nuclear-capable air-to-air refuelable bomber.”

China is known to operate road-mobile intercontinental ballistic missiles (ICBM) and arm its Jin-class submarines with nuclear-capable missiles. But it is only in recent years that the People’s Liberation Army Air Force has resurrected its airborne leg. This means China will be able to threaten adversaries around the world with a nuclear attack from the air, ground and sea.

China has undertaken a large-scale effort to modernize and expand its nuclear weapons, according to the report. The country is on track to have “at least 1,000 warheads by 2030, exceeding the pace and size the DoD projected in 2020,” according to the report. Earlier this year, Adm. Charles Richard, the commander of U.S. Strategic Command, said that commercial satellite photos have revealed that there are ICBM-delivering ground silos under construction in parts of mainland China. This is a concerning but unsurprising development for strategists who have been tracking China’s nuclear expansion.

“The PRC has commenced building at least three solid-fueled ICBM silo fields, which will cumulatively contain hundreds of new ICBM silos,” according to the report.

China is supporting the “air leg” of its nuclear triad by developing a nuclear-capable air-launched ballistic missile. This weapon could represent China’s effort to counterbalance the U.S. military’s nuclear-capable air-launched cruise missile, which is called the Long-Range Stand-Off Weapon. The point of an air-launched ballistic missile—or cruise missile—is to add new dimensions to a deterrence strategy by giving military commanders additional options for battling their enemies.