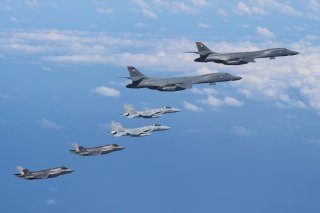 Over the weekend the United States Air Force announced that it would nix its six-month bomber rations at Andersen Air Force Base in Guam in favor of "less predictable" global deployment. Since 2004 bomber patrols from Guam over the East and South China Seas have served as a means of projecting U.S. airpower in the region.

Last week five B-52H bombers flew back to their home station at Minot Air Force Base, North Dakota. This came just days after the nuclear-capable bombers took part in an "elephant walk" show of force on the island aimed at China, North Korea and Russia. The B-52s were lined up with six KC-135 Stratotankers, an RQ-4 Global Hawk long-range surveillance drone and a U.S. Navy's MH-60S Knighthawk helicopter.

The "elephant walk" is a procession of military aircraft taxiing in close formation. Last week's walk was widely seen as a demonstration that despite the fact that China had the only aircraft carrier, Liaoning, operating in the region, that the United States still had a significant military presence.

However, with the departure of the bombers, came an end to the Continuous Bomber Presence Mission, which had seen a rotation of B-52s, B-1B "Bone" supersonic bombers and B-2A Spirit stealth bombers for half-year stints. The program ensured that at least one task force of long-range heavy bombers would be ready to respond to any potential issue in the Pacific Region.

In recent months, the Air Force suggested that it wanted to implement shorter duration bomber deployments in the American territory in the Pacific – but the U.S. military has sought to make major deployments less predictable. The goal of Dynamic Force Employment operations is to make potential adversaries such as China and Russia feel more on edge and not be able to predict U.S. military movements.

"In line with the National Defense Strategy, the United States has transitioned to an approach that enables strategic bombers to operate forward in the Indo-Pacific region from a broader array of overseas locations, when required, and with greater operational resilience, while these bombers are permanently based in the United States," U.S. Air Force Major Kate Atanasoff, a U.S. Strategic Command (STRATCOM) spokesperson, said in a statement as reported by Stars & Stripes. "U.S. strategic bombers will continue to operate in the Indo-Pacific, to include Guam, at the timing and tempo of our choosing."

The U.S. Strategic Command tweeted last week, "Our diverse bomber fleet – B-52, B-1 & B-2 – allows us to respond to global events anytime, anywhere. Whether they’re launched from Louisiana, Guam, or the U.K., long-range strategic bombers have and will remain a bedrock of our deterrence! #DynamicForceEmployment."

The B-52H bombers, along with other aircraft from Guam, have flown patrols in the South China Sea as part of the so-called Freedom of Navigation Operations, or FONOPS, to challenge Chinese claims to the hotly contested island chains in the region.