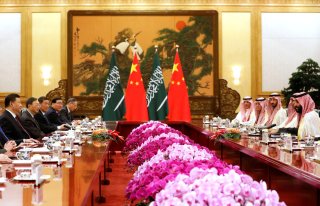 With the United States appearing to have begun a political withdrawal from the Middle East, Saudi Arabia has expanded its search for other potential security partners. Chief among these potential partners is China, which has also displayed a growing interest in forming ties in the Arab world.

The two officials also indicated that they would “strengthen coordination and jointly oppose hegemonic and bullying practices, to safeguard … the interests of developing countries together.” This comment appears to have been a reproach of the Biden administration, which has directed criticism at both Beijing and Riyadh for their repressive practices.

Both leaders agreed that they should “enhance military ties to a higher level,” according to the readout. Wei also praised Saudi Arabia’s adherence to Beijing’s line on several controversial issues, including the status of Hong Kong, Taiwan, and Xinjiang.

"China appreciates the strong support given by the Saudi side on issues related to Xinjiang, Hong Kong, and Taiwan, and fully respects Saudi sovereignty and firmly supports [its] development path," the Chinese defense minister said.

In recent years, pushed by its growing economy and its increasing need for oil, China has deepened its political, economic, and security partnerships with various nations in the Middle East. Beijing’s longstanding position of indifference to domestic political conditions—giving it flexibility in its engagement with leaders that are subject to significant criticism in the West for human rights abuses—has earned it many friends in the Arab world. Many Arab leaders now see Beijing as a valuable alternative partner due to Washington’s increasingly moralistic foreign policy.

In turn, many Middle Eastern states have refrained from criticizing China’s domestic practices, including its treatment of Uyghur Muslims in the country’s western Xinjiang autonomous region. This silence comes at a time when the United States and other Western powers have characterized the ongoing abuses in Xinjiang as a genocide.

The Sino-Saudi connection has expanded considerably over the past decade. Although Saudi Arabia remains a valuable U.S. ally, its top trading partner is now China. And while the kingdom continues to buy most of its military from the United States, it has increasingly turned to Beijing in some areas. For example, Saudi Arabia recently purchased Chinese drones for use in its military intervention in Yemen.

China has also played a key role in the regional “cold war” between Saudi Arabia and Iran through its participation in the “P5+1” negotiations over Iran’s nuclear program.