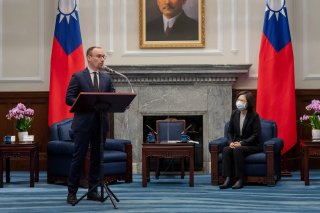 The Chinese Foreign Ministry harshly criticized the United States over its diplomatic support for Lithuania on Thursday, arguing that cover from Washington had Lithuania engage in an escalating war of words against Beijing over its close relationship with Taiwan.

Wang Wenbin, the Foreign Ministry’s spokesman, claimed that officials in Washington had “defended Lithuania’s erroneous act of creating ‘one China, one Taiwan,’” referring to Lithuania’s alleged violation of the “one China” policy in November.

That month, by authorizing the creation of a “Taiwan Representative Office” in Vilnius, Lithuania’s capital, the Lithuanian government earned Beijing’s ire. This is because the office used the name of Taiwan, rather than “Taipei” or “Chinese Taipei,” an ambiguous term the island traditionally uses to conduct its foreign relations without angering Beijing.

Recognizing the island as “Taiwan,” Chinese officials have argued, is tantamount to recognizing its independence from the mainland in violation of the policy. However, Lithuanian diplomats gave no indication that the opening of the “representative office” would actually lead to a formal recognition between Vilnius and Taipei.

In spite of Lithuania’s denials, the Chinese Foreign Ministry claimed that the office’s opening represented an implicit recognition and accused the island of “attempt[ing] to put together a small clique condoning the Taiwan independence forces.”

Following the controversy, the Chinese ambassador to Lithuania was recalled from Vilnius and Lithuanian diplomatic personnel departed from Beijing, effectively ending Lithuania’s relations with China. China has also instituted a soft embargo against Lithuanian goods, refusing to allow any to be imported into the country, which ironically led Taiwan to purchase many of them. Taipei has also pursued the establishment of a Taiwan-linked tech sector in Estonia, underwritten by promises of a $200 million investment in the country.

China’s pressure for the “one China policy” has led most countries to sever relations with Taiwan in order to establish them with the far more significant PRC. Only fourteen countries formally recognize Taiwan as the legitimate government of China; most of the rest regard Taiwan’s final status as undetermined or exclusively engage with Beijing.

Although the United States was not directly involved in Lithuania’s decision to lower relations with Beijing over the ongoing spat, U.S. diplomats quickly defended Lithuania from Chinese attacks in the aftermath of the representative office’s opening. Secretary of State Antony Blinken defended Lithuania’s conduct, arguing that the country “should be able to determine its own foreign policy free from … coercion.”