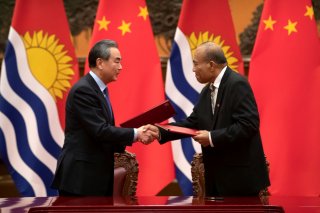 The next great military threat to the United States could be brewing on a chain of islands that’s so small it doesn't appear on most world maps.

Most people have never heard of islands like Kiribati, Tuvalu, and Vanuatu. That could be because the United States has ignored the South Pacific for too long, and its neglect is pushing the inhabitants towards China.

Sitting directly west of the International Date Line, Kiribati’s islands are the first to welcome the sunrise of each new day. They are minuscule—with a total land area of just over 313 square miles—but the chain covers an area of the ocean approximately the size of Russia, spanning as far east as Fiji, and as far west as Hawaii. The few who can spot Kiribati on a map are probably aware of the role the islands served in World War II: the Battle of Tarawa, what combatant Dick Hannah called in the title of his book on the topic Tarawa, Toughest Battle in Marine Corps History. The battle took place on an island that covers less than 31 square kilometers, and whose highest point is only 4 meters above sea level. Yet the battle was crucial for inching closer within striking distance of Japan. Between 1941-1942, the world did not notice as Japan began to occupy and expand its power in the Pacific Ocean. Similarly, many in the world today have yet to notice as China continually expands its influence in the South Pacific. The United States needs to counter this trend before it's too late.

In fact, it may already be too late. On September 19, 2019, Kiribati allied with Beijing, ending its long relationship with Taiwan. The pivot was so sudden that even Teburoro Tito, Kiribati’s ambassador to the United Nations, was not aware of the situation. He was in the office of the secretary-general arguing for Taiwanese representation when he received the news. It came as quite a shock to Tito, as the former Kiribati president has always been a strong advocate for Taiwan.

In 1941, war was being waged with bullets and tanks. Today it is fought with checkbooks and diplomacy. The Chinese Communist Party (CCP) is not content with its current geographic situation. China is exerting its influence on its neighbors through loans and influence. Why so suddenly? China is hemmed into the region by Japan and South Korea to the east, India to the west, Russia in the north, and farther south Australia and New Zealand. China has been motivated to become more involved in Southeast Asia because of its geopolitical outlook and, more recently, beyond to the Pacific.

And China’s strategy in Southeast Asia and the Pacific has been quite effective. Vietnam, Laos, the Philippines, and Indonesia have begun to align with Beijing despite local protests. In 2020, China entered into the Regional Cooperation Economic Partnership, with the notable absence of India who pulled out of the agreement in the final hour. Making China the biggest economy in the trade deal will give them more leverage in future negotiations. Most recently, China has been backing the military coup in Myanmar that overthrew its democratically elected government in favor of a pro-China general. Most recently, China awarded the military government $6 million in aid. In exchange for one less Taiwanese ally, the CCP paid Kiribati $60 million for two airplanes and boats. But it’s more than a Taiwanese ally; Tito expressed concern regarding Chinese military bases in his county. The United States should also be concerned as Kiribati lies just 1,300 miles south of Hawaii. And Kiribati is not the only island China is trying to win over. The Solomon Islands, which changed allegiances to Beijing four days before Kiribati, has had government leaders accused of taking bribes.

Not only has the United States lost influence during the Trump administration, but it actually appears to be getting worse. The Pacific Islands Forum of 2021, a time for the nations to meet with Australia, France, New Zealand, and the United States, ended in a total disaster. When it came time to elect the forum's new secretary-general, which typically rotates regions, Australia, New Zealand, and France upended the vote, instead backing Polynesian Candidate, Henry Puna. Micronesia’s five nations felt so disrespected that they left the meeting and pulled their membership from the forum. The increasing isolation of these nations will only push them further towards China. In an already tumultuous year for fiscal debt, coupled with the failure of the Pacific Island Forum, Beijing is in a position to capitalize on the chaos.

The United States decided to start taking the region seriously, sending Secretary of Defense Lloyd Austin to Palau, as well as an agreement for the island to host a U.S. base in 2020. Under the Biden administration, the United States hopes to leverage China’s peculiar geographic situation with allies and like-minded nations to curtail China’s behavior. Certainly, the United States does have many allies around China, however, direct contact with China has not been productive. The U.S.-China Summit did not advance discourse but resulted in both sides throwing insults at each other. In 2018, Australia committed to working more in the region to push back against China but its behavior at the Pacific Island Forum proved otherwise.

Attempts by China to expand its influence are not new, but the past three years have shown a doubling of its efforts. More nations are aligning with China at an increasing rate. China successfully filled the void of much-needed funding and loans that were not provided by Western powers. This is not the first time Kiribati has been offered money in exchange for strategic islands; in 2017 the Russian Monarchist Party offered to buy three islands for $350 million, but Kiribati rejected the offer. After seeing great success, it is safe to project that China will continue to advance into the Pacific. The United States is entering the game at halftime, but it’s not too late to pull out a win. Increasing aid and loans in the region is a start, but what these islands really need are solutions to their most pressing problems of climate change, public health, and, of course, Chinese political interference. The United States shouldn’t just be the number one investor in the region, it needs to become the leader in solutions before it’s too late.

Toph Cottle studies at the Johns Hopkins School of Advanced International Studies and the University of London SOAS. He lived in Kiribati for three months.