China is Building Over 100 Missile Silos in the Desert—Is It Playing a Nuclear “Shell Game?” 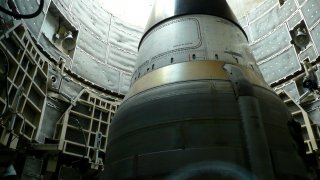 Late in June 2021, commercial satellite imagery revealed that China appears to be building a field of at least 119 underground silos for the launch of nuclear intercontinental ballistic missiles, or ICBMs, in its northwestern Gansu province. That’s in addition to around 20-25 more silos already known to be under construction elsewhere.

The 700 square mile ICBM field, located near Yumen City, also features multiple command bunkers with entrenched cables radiating out to ten ICBM silos each. And all of this is apparently after only five months of construction!

This is both startling and peculiar as China is estimated to currently deploy only 100 ICBMs. Furthermore, China’s latest ICBM, the solid-fueled DF-41, is road-mobile instead of silo-based.

Given the shocking increase in Chinese ICBM silos, many analysts believe many of the new silos may simply be left empty at any given time, presenting a “shell game” dilemma to U.S. military planners. Perhaps there could be only twelve missiles deployed amongst the 120 silos!

Like those in the United States or Russia, the Chinese silos are spaced across 700 square miles so that no two could be knocked out by one nuclear warhead. Because intelligence may not be able to tell which silos are loaded at any given time, in a nuclear exchange the U.S. military might dedicate 240 nuclear missiles—two per silo—in a counterforce attack designed to ensure the weapons potentially in the silos are knocked out.

The shell game is a strategy the Pentagon first conceived of in the 1970s to complicate the targeting of its MX missiles, and which China already considered adopting in the 1980s.

The shell game may thus be an added twist to the nuclear “sponge” strategy—maintaining large numbers of siloed nuclear weapons in a sparsely populated region to compel an adversary to expend numerous nuclear weapons knocking them out. That would leave fewer nukes left to attack forces in the field, military bases, major urban population centers, and mobile nuclear assets.

That’s why the United States’ 400 active Minuteman III nuclear missiles silos are spread out across lightly populated areas of Colorado, Montana, Nebraska, North Dakota, and Wyoming. And those silos are fortified to such a point that an adversary would need to strike each with multiple high-precision nuclear warheads to guarantee they are silenced.

But all the U.S. silos have missiles in them (save for about 50 “warm” silos left unloaded to comply with the New Start arms control treaty.) It seems unlikely that will be the case with the silos in Gansu—at least initially.

China only has a small number of silo-based weapons capable of hitting targets across the United States: ten older DF-5As carrying a single four or five megaton yield warhead, and ten DF-5Bs, which can each release three to eight smaller nuclear warheads called MIRVs that can hit separate targets.

Other silo-based ICBMs, notably the DF-4 missile, lack the range to reach most of North America. Road mobile DF-31A and DF-41 missiles instead contribute additional striking power that can reach mainland U.S. targets.

But Beijing fears that the U.S. might attempt a preemptive nuclear attack out of the belief that it can “soak up” any missiles leftover on Chinese submarines and surviving land-based launchers with its GMD missile defense system, which can potentially shoot down a few dozen incoming nuclear warheads.

A shell game strategy could mitigate fears of losing deterrence by making a counterforce strike more resource-intensive to execute. But a U.S. intelligence estimate states China is expected to increase the size of its nuclear arsenal by 50 to 100, so the Gansu silos may get filled up over time anyway—either with new DF-5Cs missile with a capacity of up to 10 MIRVs and/or a silo-based version of the road-mobile DF-41.

Despite being overall more vulnerable than road-mobile nuclear forces, silo-based forces may have more robust lines of communication, making them less vulnerable to attacks aimed at disrupting wireless command and control of nuclear forces. The communication dynamics may also make them more suitable for a prompt “launch on warning” stance, particularly if the silos host solid-fuel DF-41 missiles that do not require gassing up prior to launch. That may rationalize the continuation of a mixed force of silo-based and road-mobile nukes.

China is qualitatively and quantitatively expanding other kinds of nuclear forces too. It’s reintroducing a nuclear role for its air force as it develops an H-20 stealth bomber. And the PLA Navy will induct longer-range JL-3 nuclear missiles that will significantly improve the viability of its ballistic missile submarines.

Even if doubled in size and qualitatively improved, China’s arsenal will remain much smaller than that of the United State. However, some contend China’s military might still be tempted to carry out limited but high-payoff nuclear attacks using intermediate-range weapons like the DF-26 against U.S. bases in the Pacific at Guam, Hawaii, and Okinawa, believing its strategic deterrence adequate to inhibit Washington from retaliating with strategic nukes of its own.

But while the new silos, with or without missiles inside, mark yet another undesirable escalation in the 21st-century nuclear arms race, they arguably are being built for reasons that are not only predictable but understandable.

Beijing fears that improvements to U.S. missile defense and prompt precision strike capability could cause China to lose nuclear deterrence, making it vulnerable to nuclear attack. And thus it wants to hedge with bigger and better nuclear forces—and hasn’t been open to arms control treaties that would constrain it to its present smaller one.

That same insecurity motivates the Pentagon to point to improvements in China’s nuclear capability as to why it needs even better weapons, maintaining a feedback loop sustained by mutual fear and military-industrial interests.

In a post on social media, MIT nuclear security expert Vipin Narang argues one shouldn’t overreact to the new ICBM field when you consider the U.S.’s massive advantages in strategic nuclear weaponry, including nearly a thousand submarine-launched nuclear missiles that are virtually immune to preemptive attack, and the U.S.’s ability to deliver prompt precision attacks against enemy nuclear forces (ie. counterforce strikes).

He writes “China seeking survivability to try to escape the pressure of America's first strike advantage is unsurprising and unalarming… We pursue counterforce and Ballistic Missile Defense precisely to put pressure on our adversaries, but some then somehow act surprised when Moscow, Beijing, and Pyongyang take the bait. Using their reaction to justify even more buildup is just a recipe for the spiral model, on your dime.”