Is China Building a Secret Naval Base in Cambodia? 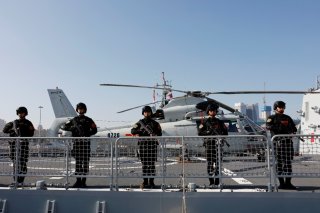 The Chinese military has reportedly begun construction on a secret overseas naval base in Cambodia along the Gulf of Thailand, although both Chinese and Cambodian officials have denied the story and attempted to disguise their activities, according to the Washington Post.

U.S. officials interviewed for the story reported that the Chinese base was being constructed as an annex to the Ream Naval Base in southern Cambodia. If completed, the base would be Beijing’s second overseas naval base after a support base in Djibouti and its first such base in the Indo-Pacific region.

The officials interviewed for the story, who remained anonymous, suggested that the presence of a naval base near the Strait of Malacca would allow China to project power into one of the world’s most significant sea lanes. They also argued that its construction fell under Beijing’s wider ambitions to increase its influence throughout the Indo-Pacific region.

“We assess that … China’s leaders … see the Indo-Pacific as China’s rightful and historic sphere of influence,” one official said. “They view China’s rise there as part of a global trend toward a multipolar world where major powers more forcefully assert their influence in their perceived sphere of influence.” They suggested that the base’s construction would be presented to regional nations as a fait accompli: “China wants to become so powerful that the region will give in to China’s leadership rather than face the consequences.”

In a statement, the Cambodian embassy in Washington, D.C. described the report as a “baseless accusation motivated to negatively frame Cambodia’s image,” according to the report.

“The renovation of the base serves solely to strengthen the Cambodian naval capacities to protect its maritime integrity,” the statement continued.

Rumors of Chinese involvement at the Ream Naval Base have circulated since 2019 when the Wall Street Journal reported that Beijing and Phnom Penh had signed an agreement allowing Chinese forces to use the base. Although the report was denied by both countries, U.S. activities at the base have since been sharply restricted; when Deputy Secretary of State Wendy Sherman visited with a U.S. delegation in 2021, her movements were highly choreographed and she was blocked from entering certain areas, according to the officials.

Foreign bases are generally regarded as essential to support a navy’s operations far from its home country, and one of the United States’s major strategic advantages has been its dense network of bases around the world. In addition to Djibouti and Cambodia, China has reportedly sought to open a base in the United Arab Emirates, and it recently signed a defense agreement with the Solomon Islands in the South Pacific, although Chinese officials have denied that this agreement is intended to lead to a permanent Chinese military presence there.