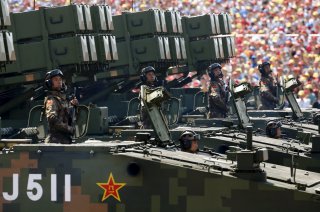 While China is already known to operate road-mobile air defenses, the Chinese government-backed Global Times newspaper claims that the QW-12 displayed anti-decoy capabilities that “no foreign counterpart has ever shown.”

It is not clear exactly what this claim means, or whether it is in fact true, but the Global Times report hints at targeting technology that can discern decoys from actual targets, in effect allowing the QW-12 to “counter” countermeasures.

“The QW-12 missile successfully shot down a specially designed target aircraft built to simulate an attack helicopter by mimicking its infrared signal,” the Global Times claimed. According to the report, “as the QW-12 missile was approaching, the aircraft released eight decoy flares that resemble the infrared signal of the target aircraft in an attempt to disorient the missile. However, the missile ignored the flares and hit the aircraft.”

However, the Chinese report goes a step further and says that the QW-12 was also able to track and destroy a 122-millimeter caliber rocket “simulating a jet or a cruise missile that flies at 360 meters a second.”

This technological capability mirrors recent American advancements in the realm of missile defense. The U.S. Army’s Patriot system, for example, has a highly-sensitive radar that is able to find, distinguish, and destroy several incoming cruise missiles with great accuracy.

Interestingly, the Global Times says the new interceptor used a “laser proximity detonator” to destroy the target, bringing it down with “shockwaves and fragments.” This proximity detonation was needed due to the high speeds of the rocket target. Proximity fusing is yet another technology that the U.S. military has also made advancements in.