China Could Have 4 Aircraft Carriers by 2022: Should the Navy Be Worried? 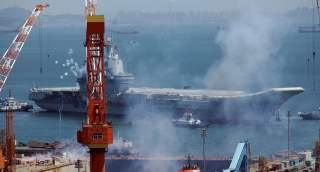