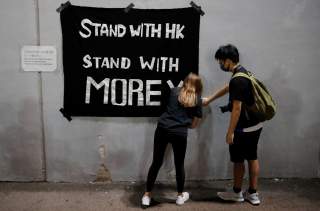 China said Friday that it never told the Houston Rockets to fire its general manager over his pro-Hong Kong tweets that ignited weeks of criticism against the NBA.

The Chinese Foreign Ministry responded to erroneous comments on #HongKong made by Houston Rockets general manager and remarks made by #NBA commissioner, stressing that lacking knowledge of the minds and hearts of the Chinese people will not work. https://t.co/nhiS2Z2PtZ

The foreign ministry said earlier in October, however, that the NBA “knows better than anyone else” how to resolve the conflict between the association and China but did not offer any specifics, according to AP.

Silver said Thursday during an appearance at the Time 100 Health Summit in New York that the Chinese government asked him to fire Morey.

“I felt we had made enormous progress in terms of building cultural exchanges with the Chinese people,” he said. “Again, I have regret that much of that was lost. And I’m not even sure where we’ll go from here.”

“Obviously, we made clear that we were being asked to fire him by the Chinese government, by the parties we dealt with, government and business,” Silver continued. “We said, ‘There’s no chance that’s happening. There’s no chance we’ll even discipline him.'”

China canceled the broadcasting of two NBA games between the Nets and the Lakers after Morey’s tweets caught media attention.

The NBA’s crisis in China has already cost the league “substantial” losses https://t.co/XWYKPGjKH4

Additionally, 11 of the NBA’s Chinese partners have since suspended relationships with the league.

NBA star Lebron James reportedly pressured the NBA to punish Morey, arguing that if an NBA player had tweeted something similar that cost the league money, said player would have been punished, ESPNs Dave McMenamin said.