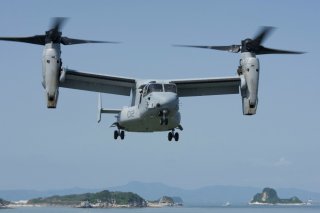 The Bell Boeing V-22 Osprey remains the most successful tiltrotor military aircraft, offering both vertical takeoff and landing (VTOL) and short takeoff and landing (STOL) capabilities. It also combines the functionality of a conventional helicopter with the long-range, high-speed cruise performance of a turboprop aircraft.

While the Osprey’s accident history has generated some controversy since entering service with the United States Marines Corps and U.S. Air Force, the V-22 has been successfully used in transportation and medevac operations in Afghanistan, Iraq, Libya, and Kuwait. Additionally, the U.S. Navy has begun to use the updated CMV-22B for carrier onboard delivery duties.

The Osprey wasn’t the first such tiltrotor.

In fact, the concept dated back to the early twentieth century when French-Swiss brothers Henri and Armand Dufaux began work on their “convertible” aeroplane. However, their vision was ahead of the technology of the era, and it wasn’t until the Second World War that German aviation pioneer George Lehberger began to realize the potential of a tiltrotor with his Focke-Achelis Fa 269. His prototype was never flown, but the concept lived on and in 1951, a joint U.S. Air Force/U.S. Army initiative developed the Bell XV-3, which became the world’s first successful Vertical Short Takeoff and Landing (VSTOL) tilt-rotor aircraft. It combined the takeoff and hovering capabilities of a helicopter with the speed and range of a fixed-wing aircraft.

Now, sixty years later there are reports that China is also developing a tiltrotor for use with the People’s Liberation Army Navy’s (PLAN’s) aircraft carriers. Engineers from three mainland-based universities specializing in naval build-up, shipbuilding, and aviation, have published their work in the Journal of Aerospace Engineering, a scientific journal published by the American Society of Civil Engineers.

A tiltrotor could be crucial for the PLAN, as it could provide better airlift capability for troops and material from a carrier deck than traditional helicopters, especially in an armed conflict in the Taiwan Strait, East or South China Seas. It could greatly enhance the strike capabilities of the PLAN’s Liaoning and Shandong carriers.

“I expect aircraft companies and the PLA’s naval and aviation institutes will join together to deliver a prototype of a carrier-based VTOL helicopter being built within three years,” warned Lu Li-Shih, a former instructor at Taiwan’s Naval Academy in Kaohsiung.

China may not be starting from scratch in its efforts, and the South China Morning Post reported that a scale model of the quad tiltrotor known as “Blue Whale,” that was shown as the Chinese helicopter show in Tianjin in 2013, was similar in design to the V-44 Bell, which is based on the V-22.

Beijing has been hesitant to move forward with the tiltrotors due to their instability problems, especially when operating from carriers. However, as China flexes its muscles in the South China Sea, it has a need for large transport aircraft. For now, it is moving forward with a more traditional helicopter design.

Unlike the V-22 and future V-44, the SB-1 is a helicopter with coaxial rotors and will replace the U.S. Army’s UH-60 Blackhawk. However, a tiltrotor could still be in development for the PLAN, and it likely could look a lot like the Osprey.