China Is Embracing a New Bind in Afghanistan 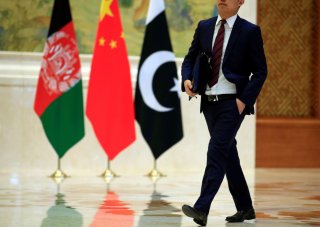 The United States’ withdrawal of troops from Afghanistan has thrown the future balance of power in the country into question. China, craving stability in its neighborhood, is widely anticipated to step up in Afghanistan and try to partner with the Taliban. As China attempts to fill the U.S.’ shoes, it could face an uncomfortable tension between its draconian policies in Xinjiang and its attempts to build influence with its Muslim majority neighbors.

However, a fruitful Beijing-Taliban relationship would have global resonance. Should this illiberal partnership become successful, it will become a success story of the authoritarian model that will only encourage further global backsliding from democracy and human rights. To prevent this and shore up human rights protection in both countries, democracies should focus their efforts in Afghanistan on a dual-pronged approach, by using diplomatic work to highlight Beijing’s hypocrisy on Xinjiang and building support for human rights and good governance on the ground in Afghanistan.

Afghanistan is the “new battleground” for China’s international ambitions. The country is the target for expansion of the China-Pakistan Economic Corridor (CPEC), a flagship infrastructure project of China’s Belt and Road Initiative. In a clear attempt to preemptively restrain the Taliban, who are increasingly likely to seize power in Afghanistan, Beijing’s Ministry of Foreign Affairs has sent out a series of tweets calling for the Taliban to support peace and reconciliation in the country and to sever all ties with the East Turkistan Independence Movement, a group that has historically fought for a separate state in the Uyghur region.

The China-Taliban relationship is varyingly described as productive and potentially adversarial. On the one hand, China sees Afghanistan as lucrative ground for the expansion of its infrastructure super ambitions. On the other, the Taliban’s Islamist politics could lead to complications given the atrocities Beijing is committing against its own Muslim populations in Xinjiang. In an attempt to offset these challenges, Beijing has called for the Taliban to “denounce terrorism,” reflecting its domestic concerns around the “three evils” of terrorism, separatism, and extremism in Xinjiang. The Taliban has attempted to reassure Beijing it will not interfere in China’s Xinjiang policies.

While China’s economic heft may lead to the Taliban making certain commitments, it also has a strong history of breaking agreements. So far, the Taliban’s failures to condemn acts of violence elsewhere do not seem to match China’s expectations on terrorism. The Tehreek-i-Taliban Pakistan, a group with its roots in the Afghan Taliban, recently detonated a bomb which was believed to be aimed at the Chinese ambassador in Quetta, the provincial capital of Balochistan Province in Pakistan. The Afghan Taliban is reportedly unwilling to retaliate against groups that threaten Chinese interests in Pakistan and who often take refuge in Afghanistan. Beijing has never been sure about the Taliban’s commitments either, and there is nothing to indicate that the current inaction against different militant groups will change in the future. This tension creates a wedge issue for Western democracies to use in their own diplomatic engagement with both parties.

How Should Democracies Respond?

Frontline diplomacy with those in power in Afghanistan should address the obvious: Beijing’s actions in Xinjiang. Democracies should focus on highlighting the extensive atrocities in Xinjiang, which would help to complicate relations between China and the Taliban. This would reduce the chances of a straightforward China-Taliban collaboration building the appeal of authoritarian governance. This may take a while to have an impact—many Muslim-majority countries have publicly supported China’s Xinjiang policies at the United Nations. However, consistently raising this issue could push Beijing into some difficult conversations with its new Islamist partner.

Given the U.S. military withdrawal, humanitarian and diplomatic work in Afghanistan will now take precedence. If the China-Taliban marriage of convenience works out, democracies will need to take a “small power” approach whereby sustained and coherent diplomatic pressure is focused on specific areas, such as rights for women and girls. Democratic powers should focus now on empowering local civil society organizations, whose numbers have significantly increased in the past two decades but which face urgent risks of attacks and killings. A backchannel diplomatic approach, focusing on promoting values of equality through empowering local organizations, would be much more effective at supporting the growth of human rights and democracy.

There will be no straightforward approach to the new situation in Afghanistan, but that should not mean democracies should resign themselves and disengage. That would only allow China to become more of a norm-setter in the wider region. Collaborative diplomacy, whereby democracies take a unified approach against the country’s illiberal players, will be an effective way to promote and champion human rights in both countries.

James Jennion is a foreign policy analyst and adviser based in the UK, where he works on human rights and crisis prevention. He writes in an individual capacity and has been featured in outlets like the Diplomat and Just Security.