China Expects to Open Shanghai Shipyard for Navy Construction in 2023 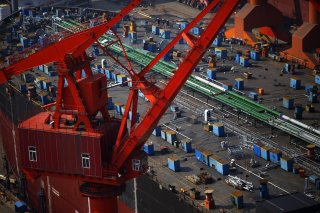 There is already concern within the Department of Defense that the People’s Liberation Army Navy (PLAN) is now larger than the U.S. Navy. That threat is compounded by the rapid pace of Chinese shipbuilding.

China’s second aircraft carrier is now operational, and its third could launch from the shipyard in early 2022. The Chinese Navy is also fast-tracking a new fleet of Type 075 amphibious assault ships which appear similar to the U.S. Navy’s America-class landing helicopter assault ships. The PLAN is also adding new destroyers and other surface ships at an alarming rate.

Now, the Chinese government-backed Global Times newspaper reports that China is progressing quickly building a new shipyard. The first stage of construction is expected to be complete in late 2023.

“The new site is expected to allow China to build a range of warships - including amphibious assault ships, amphibious landing ships and frigates - faster, better and more efficiently,” according to the newspaper.

The shipyard raises an interesting question about fleet size versus quality. Many maintain that even if the Chinese do now operate a larger number of warships, that does not mean the PLAN has surpassed the U.S. Navy. A superior warship in terms of sensors, weapons, computing, and range could be well-positioned to outperform a larger number of less capable ships.

While China may not match U.S. Navy’s technological superiority despite how many ships it has, there is broad discussion that it is closing the gap quickly. Given this scenario, building a larger and much more threatening group of new warships which are also competitive technologically presents what could be seen as an unprecedented threat.

As an example of quality, the Chinese are also adding a new generation of destroyers called the Type 055. While particulars and many details related to the technology and weapons on board the ship are unavailable, the ship appears to be a mix between both the stealthy Zumwalt-class destroyers and high-tech DDG Flight III Arleigh Burke-class destroyers.