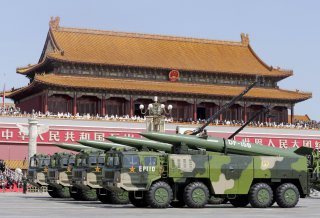 The Chinese government announced on Tuesday that it had initiated additional live-fire drills around Taiwan, the democratically-controlled island off of mainland China, following Speaker of the House Nancy Pelosi’s visit—a trip that Chinese officials characterized as an affront to China’s sovereignty and vowed would lead to “serious consequences” for both Taipei and Washington.

The drills included both conventional maritime and air exercises, including use of China’s Chengdu J-20 advanced fighter jets, as well as test missile launches which could pass over Taiwan, according to the Chinese state-run Global Times newspaper. The paper quoted Senior Col. Shi Yi, a spokesperson for the People’s Liberation Army (PLA) Eastern Theater Command, who claimed that the exercises would be held in five different areas surrounding Taiwan, functioning as a rehearsal for a future military operation against targets on the island.

“The operation is a stern deterrence against the U.S.’s recent provocations on the Taiwan question, as well as a serious warning for ‘Taiwan independence’ secessionists’ attempts to seek ‘independence,’” Shi said.

Although the PLA had conducted exercises prior to Pelosi’s trip to Taiwan, which the speaker did not confirm would take place until she had landed, they expanded in the wake of her arrival. China’s state-run Xinhua News Agency reported that the PLA would conduct further exercises in six areas surrounding the island from Thursday until Sunday, during which all other entry into those areas by civilian boats and aircraft would be forbidden. However, several U.S. Navy ships—including the USS Ronald Reagan, a nuclear-powered aircraft carrier—were stationed in international waters to the east of Taiwan prior to Pelosi’s visit, as part of what a Navy official described as a “routine deployment.” The precise positions of the ships are unknown, and it remains unclear if U.S. and Chinese vessels will come into contact in the area surrounding Taiwan.

The United States and Taiwan officially broke diplomatic relations in 1979 after Washington recognized Beijing and formally committed to the “One China” policy. However, the United States has continued to provide military aid to Taiwan and maintains a cordial political relationship with the island quasi-nation.

Reactions to Pelosi’s trip were widely positive in Taipei, but some experts and commentators in the United States criticized the speaker, suggesting that her visit served no geopolitical purpose and would further antagonize China at the same time the United States has sought to devote more of its resources toward aiding Kyiv in the ongoing conflict in Ukraine.