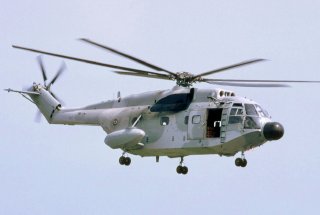 The Chinese-backed Global Times newspaper reports that the now-revealed Z-8L helicopter is a first-in-class fifteen-ton aircraft capable of transporting heavier equipment than its predecessor.

“The Z-8L has a wider body so it can accommodate a Bobcat all-terrain assault vehicle within its well-protected cabin, whose size is comparable to the Russia-made Mi-17 helicopter, the magazine report said, noting that the larger Z-8L is the PLA's first 15 ton-class helicopter,” the paper says.

The original Z-8 is thirteen tons and the Z-20 is ten tons. The new Z-8L is also reported to advance technology by virtue being equipped with a “radar warning receiver and infrared decoys.”

Interestingly, the new Chinese helicopter weighs approximately the same as the thirty-three-thousand-pound U.S. Army CH-47 helicopter, a workhorse transport plane in service since the 1960s. Despite the weight similarities, the configurations of the helicopters look decidedly different, as the Chinese Z-8L has an elongated back end of the fuselage as opposed to the Chinook’s more square-like back door. The body sizes, however, do appear comparable, and certainly, the mission sets have similarities.

This appears as a Chinese effort to out-perform the U.S. Chinook which has for quite some time operated with an ability to sling load a Humvee, Joint Light Tactical Vehicle or even M777 155-millimeter artillery. It may not be clear just how much a Z-8L might be able to transport, as it depends upon its configuration and composition, however, should the Chinese report be accurate, it does at least have an ability to transport some armored assault vehicles. Such a vertical maneuver capability could give Chinese forces an ability to airdrop weapons and tactical combat vehicles into high-altitude mountainous terrain, areas behind enemy lines or into other locations not passable by wheeled vehicles. This would bring an ability to parallel some of the operational capabilities of the CH-47.

However, a difference perhaps of greatest significance may be that the Chinese Z-8L is in part designed for amphibious attack, a strategy intended to drop armored vehicles and forces off on a beachhead in support of an amphibious landing. This kind of vertical take-off ability could also enable vertical mounted maneuver operations similar to what the Marine Corps Osprey does and conduct air assaults behind enemy lines. However, while much is not known about the Z-8L, it is doubtful that its speed or combat radius matches the Osprey. When in airplane mode, the Osprey can reach speeds greater than 220 knots and has a combat radius greater than 450 kilometers.

Along with some of the functionality of the Osprey, the new Z-8L might also parallel the Marine Corps CH-53, a maritime transport helicopter able to launch and return from U.S. Navy amphibious assault ships.

Lastly, the Chinese paper reports that the Z-8L is engineered with advanced survivability equipment such as “infrared decoys.” Infrared decoys are fairly standard helicopter defenses which, like flares, send out a heat-emitting object to attract, and therefore divert, incoming heat-seeking missiles. The United States, however, is now making progress with a helicopter survivability technology called CIRCM, a common infrared countermeasure which uses an advanced “laser-jammer” to throw incoming missiles off course. It may not be at all clear if China’s decoys are in any way comparable to advanced U.S. helicopter survivability systems, which also include a system called Common Missile Warning System which sends off flares or decoys to thwart attacks. This technology, in service for many years now, has been credited with saving lives in combat.