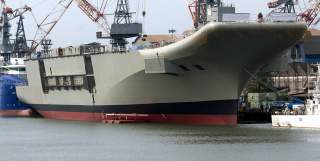 Key point: Accidents happen and China is using that to make fun of India and claim it was due to general incompetence.