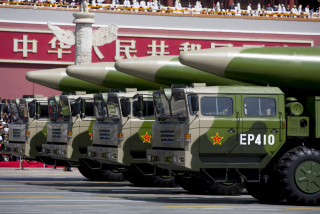 Since 2007, China has seemingly been focused on one of America’s greatest strengths—and greatest vulnerabilities.

There are around 1,957 satellites in orbit around our planet. 849 of them belong to the United States, and out of those, only one of them—launched late last year—is resistant to jamming by foreign powers.

While this should be alarming to the United States of America, it seems one country takes more interest in this fact—The People’s Republic of China.

With their “hands in a lot of jars,” China is currently working across the world and in space, including a space operation to clean up space debris, though the Defense Intelligence Agency claims that this could be a cover to set up operations against U.S.-made satellites.

“China is employing more sophisticated satellite operations and probably is testing dual-use technologies that could be applied to counterspace missions,” the DIA report read.

The report on the potential ambush against American satellites was released last month, and discusses other kinds of weaponry that may be being sent skyward from launch pads in the Middle Kingdom.

“China continues to develop a variety of counterspace capabilities designed to limit or prevent an adversary’s use of space-based assets during crisis or conflict,” the report said.

In addition to the research and possible development of satellite jammers and directed-energy weapons, China has probably made progress on kinetic energy weapons, including the anti-satellite missile system tested in July 2014.”

Since 2007, China has seemingly been focused on one of America’s greatest strengths—and greatest vulnerabilities.

“PLA writings emphasize the necessity of ‘destroying, damaging, and interfering with the enemy’s reconnaissance,’” the report stated. “Communications satellites, suggesting that such systems, as well as navigation and early warning satellites, could be among the targets of attacks designed to ‘blind and deafen the enemy.’”

The report also noted how the PLA has focused on being bigger, better and higher-tech, looking to match the United States, only without the burden of having to develop much of the technology themselves. Through theft of intellectual property, espionage and reverse-engineering, the Chinese government has been releasing American-like tech in recent years, often with mixed results that point to “stealing parts of the puzzle” without having all of the parts.

As the dragon continues to rise in the East, the United States would be wise to strengthen cyber-security, bolster their satellite network, and prepare themselves for a new, “old” kind of warfare—one that might be fought without the reliable technology that they have come to rely upon.