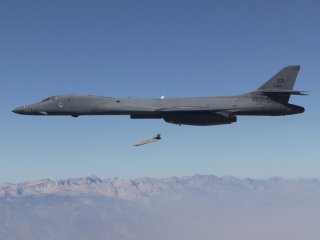 Here's What You Need To Know: One impetus for developing LRASM was the realization that Russian and Chinese anti-ship missiles can engage U.S. ships far beyond Harpoon’s range. The latest version of Russia’s P-800 Onyx, the Onyx-M, reportedly has a range of 500 miles. More relevant to Australia’s strategic situation, China’s CJ-10—based on Russian missiles, and mounted on the new Type 055 destroyer—has an estimated range of 800 miles.

The U.S. State Department has approved the sale of up to 200 Long Range Anti-Ship missiles, plus training and support equipment, at an estimated cost of $900 million. The missiles will be mounted on Royal Australian Air Force F/A-18 Hornet fighters.

“Australia intends to use the missiles on its F-18 aircraft and will provide enhanced capabilities in defense of critical sea-lanes,” according to the State Department’s Defense Security Cooperation Agency. “The proposed sale of the missiles and support will increase the Australian Navy's maritime partnership potential and align its capabilities with existing regional baselines. This is Australia's first purchase of the missiles.”

Malcolm Davis, a senior analyst at the Australian Strategic Policy Institute, believes LRASM is needed to replace Australia’s American-made, Cold War-era Harpoon missiles are overdue. The Lockheed Martin LRASM, which packs a 1,000-pound warhead, has a range of at least 200 miles, compared to about 70 miles for the Harpoon.

“ I think acquiring LRASM for Hobart- and Hunter- class naval surface combatants would be a logical step to replace outdated, slow, and short-range Harpoon,” Davis told the National Interest.

“Acquiring LRASM for RAAF F/A-18F will significantly enhance our ASuW [anti-surface warfare] capability from that platform—and one would expect from the P-8A as well,” Davis said. Australia is buying fifteen of Boeing P-8A Poseidon maritime patrol aircraft, along with MQ-4C Triton long-range naval patrol drones.

To be fair, Harpoon was never a long-range weapon compared to Soviet models, even during the Cold War. But one impetus for developing LRASM was the realization that Russian and Chinese anti-ship missiles can engage U.S. ships far beyond Harpoon’s range. The latest version of Russia’s P-800 Onyx, the Onyx-M, reportedly has a range of 500 miles. More relevant to Australia’s strategic situation, China’s CJ-10—based on Russian missiles, and mounted on the new Type 055 destroyer—has an estimated range of 800 miles.

The stealthy LRASM, based on the JASSM-ER air-launched cruise missile, is already arming U.S. Navy F/A-18E/F Super Hornets. A variant, designed to be fired from Vertical Launch System tubes on surface ships, is under development.

Not surprisingly, Davis sees longer-range anti-ship missiles as crucial for Australian surface ships. But there’s another weakness in Australia’s surface fleet: lack of vertical launch systems (VLS), which consist cells on a warship’s deck that function as little missile silos that can launch anti-ship, anti-aircraft or land-attack weapons. A 10,000-ton U.S. Ticonderoga-class cruiser has 122 VLS cells, while even a small 2,500-ton Russian Gremyashchiy-class corvette is armed with 12 VLS cells.

“The problem is that our Hobart-class AWD [air warfare defense] and future Hunter-class frigate still only have eight containerized ASuW missiles each, rather than VLS-based weapons,” “We are under-gunned in the ASuW mission. LRASM would give us enhanced range of engagement, and offer us a much more capable missile than even the most advanced variant of the Harpoon, but we do need to get greater volume of fire somehow. So LRASM is a good step forward—but more needs to be done as we think about future Navy force structure.”

Michael Peck is a contributing writer for the National Interest. He can be found on Twitter, Facebook. or on his website. This article first appeared earlier this year and is being republished due to reader interest.