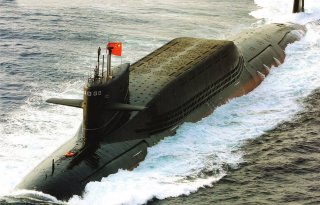 During the celebrations for the 71st anniversary of the Chinese People’s Liberation Army Navy (PLAN), two upgraded Type 094A nuclear-powered submarines have joined the fleet, bringing the total of these boats to six. The Type 094, or Jin-class, have been described as tools for promoting national prestige rather than for true nuclear deterrence so it is fitting that their arrival comes as China continues to present its great power status.

The new vessels are revamped/upgraded versions of the Chinese Navy’s second-generation nuclear-powered ballistic missile submarines (SSBN) and will bolster the PLAN’s underwater combat strength. The submarines feature a number of technological upgrades and enhancements including improved radar, sonar and torpedoes.

China had originally announced plans to build a total of six of the Jin-class submarines, and four were shown during last April’s 70th anniversary demonstrations in Qingdao, Shandong province. With the arrival of these additional two, the number has reached the planned half a dozen. A total of eight hulls are also believed to exist, and the class may ultimately grow to a full dozen.

The Type 094 submarines are approximately 137 meters in length and equipped with 12 missile tubes, each capable of firing the JL-2 SLBM (Submarine Launched Ballistic Missile), which can carry up to three nuclear warheads to a target up to 7,200 kilometers away. The JL-2 had replaced the JL-1 SLBM that had been deployed on the Type 092 submarine.

The new Type 094A is a variant with modified and improved sails, and could be equipped with a total of 16 launch tubes, along with the new Julang-2A (JL-2A) ballistic missile, which has a far greater range than the JL-2, and could potentially reach the entire United States from the Yulin Naval Base on Hainan Island.

The submarines are just the latest new weapons to have been delivered to the Chinese military in the past year. In addition to the Shandong, the first Chinese-built aircraft carrier, the Chinese have taken delivery of the J-15, which is a mass-produced carrier-based fighter jet. Other additions include the Type 055 destroyer, a new strategic nuclear-power submarine and a new anti-submarine patrol aircraft.

It has been reported that China State Shipbuilding Corp., the state-owned builder of ships and submarines in Wuhan, has worked overtime since March 3 to ensure delivery of the submarines. The facility has been “making up for time lost” due to the coronavirus outbreak. While the city, is located 840 kilometers from the sea, the completed ships built there are able to reach the Chinese coastline via the Yangtze River.

Chinese defense contractor Wuchang Shipbuilding Industry Company built a complex 10 years ago on 3.3 square kilometers, and the site has reportedly engaged in significant efforts to update the navel equipment and national defense of China.