China Says It Could Sink U.S. Navy Aircraft Carriers. That Might Not Be Accurate. 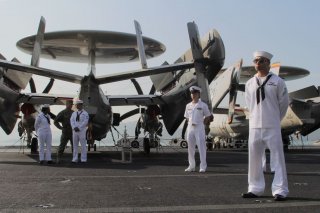 A Chinese-government backed newspaper is reporting that U.S. carriers in the South China Sea are “fully within the grasp of the Chinese People’s Liberation Army…..which has a wide selection of anti-aircraft carrier weapons like the DF-21D and DF-26 ‘aircraft carrier missiles.’”