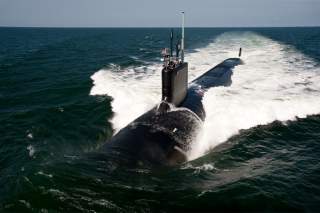 China is developing a laser-equipped satellite that can detect deep-diving U.S. submarines.

Project Guanlan (“watching the big waves”) aims to create a satellite that can detect submarines 500 meters (1,640 feet) below the surface, far more than previous attempts by the United States and Russia.

Song Xiaoquan, a researcher on the project, said that if the project is successful, it will make the upper layer of the sea “more or less transparent,” according to the South China Morning Post.

“It will change almost everything,” Song said.

A Chinese scientist, speaking on background, told the South China Morning Post that despite technical questions about the feasibility of the concept, the Chinese government had agreed to fund the project because researchers are trying a new approach.

“The device is designed to generate high-power laser beam pulses in different colors, or frequencies, that allow sensitive receivers to pick up more information from various depths,” the newspaper said. “Those laser beams can scan an area as wide as 100 kilometers (62 miles), or concentrate on one spot just one kilometer (0.62 mile) wide. It will be used in conjunction with a microwave radar, also mounted on the satellite, to better identify targets. Although the radar cannot penetrate water, it can measure the surface movement with extremely high accuracy—so when a moving submarine creates small disturbances on the surface, for example, the radar will tell the satellite where to throw the laser beam.”

“Sometimes there may not be enough light to reach 500 meters and back, but we can still try to work out what’s down there by taking an indirect measurement at a shallower depth,” Song said.

The laser will reportedly focus on the thermocline, the layer of water where temperatures change sharply and which submarine skippers take advantage of to avoid detection.

Strangely, even some Chinese scientists question the feasibility of the project. Laser radar, or Lidar, has been tried for in anti-submarine warfare. In 2010, DARPA's Deep Sea Operations program sought to develop blue-light lasers for undersea communications and hunting subs. But orbital laser beams can be affected by clouds, murky water and fish, as well as being scattered in the water.

This isn't the first time that China has turned to space to detect American subs. In 2017, the South China Morning Post speculated that the crew of the Shenzhou XI manned mission could have been tasked with testing anti-submarine detection technology in addition to their scientific duties. The spacecraft carried a cold atom clock that could be used to support cold atom interferometers—to be mounted on China's upcoming space station—that could detect the gravitation ripples left by submerged submarines.

Nonetheless, there still remains the question of whether laser detection will work. “Five hundred meters is ‘mission impossible,’” a Chinese Lidar expert told the South China Morning Post. "They [project researchers] won’t be able to break through the darkness guarded by Mother Nature—unless of course they are Tom Cruise, armed with some secret weapons.”