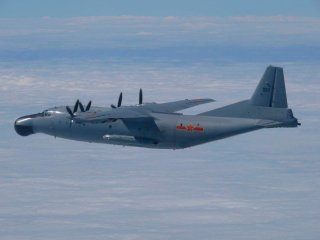 China’s People’s Liberation Army (PLA) is revving up its submarine-hunting operations in waters near Taiwan and the Taiwan Strait, which separate the island from mainland China.

According to the Global Times, a Chinese government-backed newspaper, a Chinese Y-8 anti-submarine warfare aircraft entered Taiwan’s air identification zone last Tuesday, and flew between Taiwan and the country’s Dongsha Islands in the South China Sea.

As Global Times reported, this is the first time that Taiwan has reported Y-8 patrols in its vicinity since March 1. Prior to this incident, the PLA had primarily deployed ship-based Z-9 and Ka-28 helicopters for submarine warfare missions. The paper also speculated that the new patrols could be an effort to demonstrate the Y-8’s effectiveness and operational status, following what the Global Times described as “unconfirmed reports” of a Y-8 accident or crash in the region in March.

The Global Times further quoted a Chinese military expert explaining the rationale for the spy-plane patrols.

“At a time when external forces have been frequently sending spy planes to conduct close-in reconnaissance near the Chinese mainland, dispatching warships to provocatively sail through the Taiwan Straits, and deploying submarines to the South China Sea, it is necessary for the PLA to enhance its capabilities and preparedness to monitor and patrol relevant regions with not only anti-submarine warfare helicopters, but also fixed-wing aircraft, as the latter can cover a larger area in a shorter time,” the expert said, according to the paper.

The Chinese report went on to suggest that more of these kinds of patrols are likely in the future.

One possible reason for this Chinese anti-submarine warfare emphasis could suggest that the PLA operates with a clear understanding of just how crucial U.S. and Taiwanese submarines could be in any warfare scenario over Taiwan.

With the launch of the United States Navy’s Virginia Block III attack submarines, the Navy’s fleet is becoming highly technologically sophisticated. The Block III submarines are engineered for land attack as well as clandestine surveillance missions. They could prove decisive in the event of a Chinese amphibious assault on Taiwan, as they might be able to operate undetected in high-risk coastal areas near the shores of Taiwan or mainland China. Newer Block III and follow-on Virginia-class submarines operate with next-generation sensors, advanced Large Aperture Bow sonar arrays, and engine quieting propulsion technologies, making them much harder to track. As part of this survivability and lethality equation, Virginia-class submarines will soon be launching recoverable mini-drones from their missile tubes to extend the reach of their undersea surveillance missions.